A Christmas Legacy: A Novel 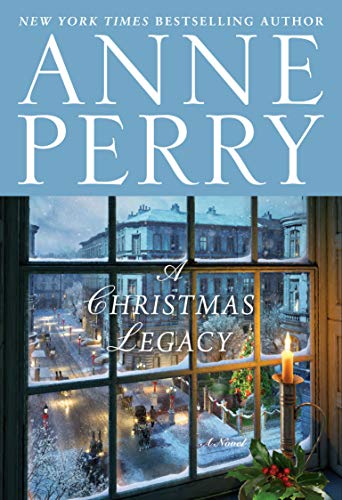 Gracie Tellman, happily married and the mother of three young children, is shocked when Millie Foster, the daughter of her deceased best friend, shows up at her house. It is closing in on the Christmas holidays, and Millie is gravely distressed. She states that in the household where she is employed things are turning up missing, and Millie is afraid of being accused of theft, though she has never stolen anything.

Her bosses, Mr. and Mrs. Harcourt, are treacherous employers who treat their help like lowly slaves. Millie realizes they could quickly throw her and the other nine employees—a couple who are mere children—out in the cold with no references or place to go. At this time of the year, and with the current economic conditions in Victorian England, it would be almost impossible to attain another position.

The only one who can help Millie is Gracie, for Gracie once had been a former maid herself. Though Gracie's employers were kind and generous, she knew the job. The holidays are quickly approaching, and Gracie is needed at home, yet she decides to take Millie's place, and she tells the Harcourts Millie is ill, and she is there to cover for her until she regains her strength.

Gracie no sooner enters the property and can sense the tension, even between the other servants. Everything is strait-laced and prim and proper, for they all address each other in a formal manner. There appears to be no camaraderie or friendliness among the help, though Gracie realizes they are frightened for their positions. They are bound together as if family, for they have no one else.

Although things seem to be running appropriately, the owners are churlish and aloof. When Gracie learns the master's mother is secreted to a bedroom hidden in the attic, Gracie takes pity on the older woman. Shocked to see she is frail and looks half-starved, Gracie determines she will care for her.

One day Gracie is in Mrs. Harcourt's closet hanging up her gown when she overhears the Harcourts arguing in the adjoining bedroom. They are discussing their now dire financial straits and considering which of their staff they should terminate. It also seems they are anxious for Mr. Harcourt's mother to die, which they believe would get them access to her assets and get them out of their current situation. Gracie is astounded by what she hears but remains silent, fearful of being spotted and accused of eavesdropping.

In the short time Gracie has been working in the household, she feels contempt for the Harcourts and empathy for the servants she has come to know. But what can she do?

Gracie decides to befriend Mr. Harcourt's mother by bringing her treats until one day she notices the woman lying in bed in filthy sheets and a soiled gown. Shame and embarrassment have her seething for the way this grand lady is being treated. She changes the bedding and bathes the woman giving her a clean nightgown to wear and a way to regain some sense of dignity. While attending to her, Gracie talks about her children, getting a weak smile out of the woman, making her feel better. However, she is still distraught by the neglect this woman is facing.

The distinct differences between the classes of that time period are shocking and downright sad. The contempt of the homeowners toward not only their staff but their own flesh can make one's blood curl. What is also heartbreaking is how everyone refers to the family's matriarch as the "old lady" and not Mrs. Harcourt or "mother." How insensitive some people can be, especially when it comes to money and status. This novel contains facts of a long-ago era in Victorian England. Still, there also is the mystery surrounding the seclusion of a frail and helpless family member while conveying heartbreak, fear, and the yearning for a better life of the household help. Will good win out over the evil taking place in this domicile, or will it continue to prevail?