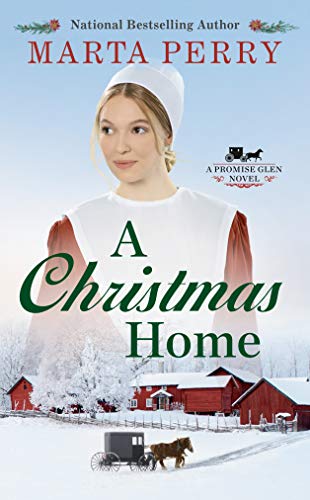 Amish-raised Sarah Yoder lost her mother when she was 18, leaving her to nurture her younger siblings. She achieved her duty by protecting the children and keeping them happy though her father let no moss grow under his feet by constantly moving them to different places while he searched for employment. Now, with the youngest sibling married and settled, Sarah moves back to her beloved hometown of Promise Glen, a green valley tucked between sheltering ridges in central Pennsylvania.

Sarah’s Grossmammi welcomes her with open arms, thrilled she is back, and she settles in to live with her while her cousin Eli, his pregnant wife Ruthie, and their two-year-old daughter Mary live in the main house. Sarah is uncertain how Ruthie feels about her being there, and she insists she does not plan to take over Ruthie's domain.

Within a short time, Sarah is lucky to find employment with Noah Raber, a neighbor, and custom furniture maker. Though Noah is a master craftsman, he knows nothing about business, so Sarah resolves to get his books in order. Their relationship is strained in the beginning for Noah is introspective and reserved. Meanwhile, Sarah is more outgoing, but at first, she keeps to herself so as not to rattle him.

Mark and Matty, Noah's six-year-old twins, melt Sarah's heart, and she makes a concerted effort to connect with them. Janie, their mammi and Noah's wife left him and the boys when they were babies. Though Sarah dreams of having a family of her own, she refuses to marry a man for the purpose of raising his children, which she did with her brothers and sister. Sarah desires what every woman wants—a man who loves her for herself, not as a maid and a parent. This does not concern her too much, because Noah isn't divorced, and he has no idea of Janie's whereabouts. Even if he did know, divorce is not allowed in the Amish faith.

Sarah considers Noah could attain more customers if he advertised his business, yet when she broaches the subject, he becomes angry and puts her in her place by reminding her she is just his employee. Noah does not take to "forward women," which he considers Sarah to be, but she appreciates how expensive it is to raise youngsters. She pushes the issue until he acquiesces, though she finds his indifferent manner hurtful.

After a while, Noah observes how well Sarah and his children bond, and he soon acquires a soft spot toward her, but he can do nothing about it. Sarah starts to fall in love with Noah; however, she must lock her feelings away for being together is something that can never be.

"Noah slid into her thoughts despite her determination to keep him out. Maybe that was all of a piece—her growing affection for the twins, the fierce attraction that had led them so close to an embrace, even this yearning for a child. . . .

. . . "Her grandmother rounded the table to put an arm around Sarah's waist. 'Tell me, child. You have feelings for Noah, ain't so?'

"Sarah turned her face away, unwilling to meet those wise old eyes. 'We're friends. I . . . I care about him and the boys. I know it can't go beyond that.' Please don't ask me anything else. Please don't read my heart.

"'It's hard sometimes to understand God's doing.' She gave Sarah a squeeze. 'This is one of those times. All we can do is trust His plan.'"

While Sarah spends more time with Noah and his boys, her feelings for them grow as her heart breaks. Will she ever find true love, happiness, and a life with children of her own?

A Christmas Home is the first installation in The Promise Glen Series. As with Perry's other inspirational novels, A Christmas Home employs the loving bond of family and community along with longing and heartache, yet a strong trust in God that things will all work out in the end. This book also Includes some mouth-watering recipes, a glossary of Pennsylvania Dutch words and phrases, and information about Amish Christmas customs, making this a heartwarming read.