A Christmas Escape: A Novel 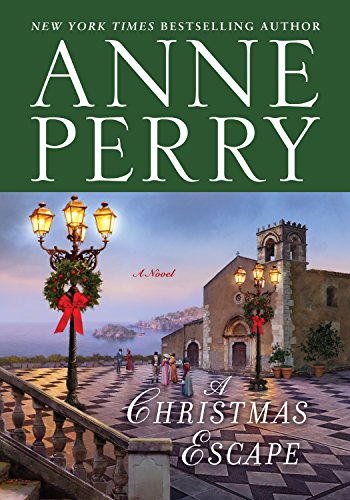 Anne Perry’s Christmas novels are comfort food for the reader who wants a short mystery novel with a holiday theme. As enjoyable as a cup of rum-laced eggnog and a slice of gingerbread, A Christmas Escape, number 13 in Ms. Perry’s yuletide series, takes the reader to the Mediterranean island of Stromboli where a group of British tourists plan to spend the holiday.

Charles Latterly, middle-aged and lonely, hopes the island’s rugged beauty will revive his depressed spirits. Recently widowed, Charles finds his life meaningless, and his grief lacking a “deep ache of bereavement. It forced him to realize that perhaps he had felt alone for a long time.”

He is greeted by Stefano, owner of the small hotel nestled at the foot of the island’s volcano. “It’s rattling and making noise most of the time. . . . Don’t worry, lava doesn’t come this way. Just rocks now and again.” This is a discomforting description of Stromboli’s volcano, but Charles supposes that if Stefano isn’t unduly worried, then he shouldn’t be, either.

Charles’s fellow guests are a mixed and somewhat volatile group. The most charming guest is 14-year-old Candace Finbar who is visiting Stromboli with her guardian and great uncle, Roger Finbar. Candace gives Charles a brief description of the other guests, two of which she finds unpleasant. “I get fed up with Mr. Bailey and Mr. Quinn making sideways remarks at each other that never really mean anything.”

Candace describes Colonel Bretherton as “stuffy, and he never really knows what to say, but he’s quite nice.” She is also sure that the colonel is very fond of Mrs. Bailey whose husband treats badly. She compares her great uncle Roger to the volcano: “All old and living quietly in the sun, not making any fuss.”

Charles agrees with Candace’s assessment of each of the guests as he meets each at lunch. Mr. Quinn is a writer famous for a book about a lively young woman, but he is himself a rather dull man. Mr. Bailey’s snide remarks insinuate than such a dullard must have difficulty writing about such a passionate woman. Then he has a disapproving remark when Candace admits that she has read the book. “I’m surprised you allow a child her age to read such things.”

Bailey expresses his disapproval of Roger Finbar as Candace’s guardian. “I can’t imagine how you come to be guardian of a child, and a girl . . . What on earth were her parents thinking of?”

After lunch, as Charles walks back to him room, he overhears what is apparently an ongoing argument between Bailey and his wife about his intention to sell her childhood home. As the husband controls both his wife’s money and property during this period before The Married Woman’s Property Act was passed in Parliament, Isha Bailey has no recourse. Bailey can do as he pleases, and it pleases him to sell his wife’s home.

Not only do the Baileys argue about the sale of Isha’s property, but also about Quinn. “What on earth makes you defend a pompous, self-important fraud like Quinn?” Isha retorts that Bailey is jealous, and the argument ends in a slammed door and the sound of a woman crying. Charles feels helpless because there is nothing he can do, but Bailey has the law on his side. And what is the basis for his hatred of Quinn?

Colonel Bretherton happens by and tries to comfort Isha, but like Charles there is nothing he can do. He ends the conversation by warning her not to climb the volcano by herself. Charles remembers that Stefano has also warned everyone against climbing the volcano alone. The hotel owner has also issued warnings. The mountain is sleeping, not dead, Stefano has reminded each guest.

Perry uses the volcano as it rumbles to a smoky, ash-filled life as a symbol for the festering ill will that Bailey brings to the Christmas guests. As the volcano finally rouses itself to erupt, flinging stones and red-hot lava down on the hotel, Charles and Roger Finbar find Bailey under a fallen timber. But it is not blunt force trauma that ends Bailey’s life, it is a slit throat. The question is who left the shelter of the basement during the early minutes of the eruption to track down and murder Walker Bailey?

Falling stones flung down on the hotel by the erupting volcano kill both Stefano and Roger Finbar, leaving the rest of the guests to down the mountain toward the village and the sea. Charles finds himself both the guardian of Candace and the leader of the tiny band of remaining guests, not a position for which he feels fit. He has always felt himself a failure; how can he succeed in leading anyone to safety?

A Christmas Escape is a delightful cozy with its charming characters that mirror 19th century manners and attitudes. Perry’s brief descriptions of her characters are artistic in a way many authors fail to achieve. A few verbal brush strokes delineate each guest without the excruciating detail that would needlessly slow the narrative. In a novel of less than 200 pages, details must be brief, vivid, and meaningful.

A Christmas Escape will please fans of historical cozies, but is not recommended for those who enjoy noir. There is murder in this Christmas story, but very little blood.