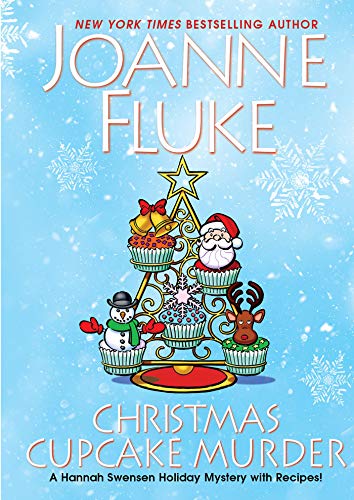 As the Christmas season and the dead of winter commences in Lake Eden, MN, Hannah Swensen is busy making goodies at her shop, The Cookie Jar. When a homeless man knocks on her back door, looking half frozen and asking if she has any work he can do, stating he is not looking for money, but would love to have   something to eat, Hannah feels bad for him. She welcomes him inside offering him a cup of hot coffee and her latest concoction, a German chocolate cupcake. She notices how emaciated he appears as well as that sad look on his face when he mentions his mother's German chocolate cake had been their family's official birthday treat, Hannah draws him out asking questions about himself, but he has no recollection of who he is.

While he offers to clean the snow off her vehicle, Hannah delves through her lost-and-found items and produces a warm sweater and scarf for him along with giving him five dollars and more cupcakes. After he departs, she continues baking, but she can't get him out of her mind and tries to think of ways to help him.

Soon she is interrupted by her mother Delores, who only comes to the store when in need of something. Because this is Hannah's busiest time of year, she groans inwardly. Luckily, her mom's request is for Hannah to find some Christmas decorations, so she and her best friend, Carrie can decorate the hospital for the holiday. Upon spotting Hannah's cupcakes, she inquires if she will be able to sell all she's made, making Hannah suspect she'll guilt her into donating some to the hospital. So she offers six dozen of her newest culinary delight, saying she will even deliver them.

Hannah's bakery seems to be the place for social gatherings for not only does Delores often arrive, helping herself to coffee and goodies, but also Carrie; Mike, the local police officer; Hannah's friend Norman; and her sisters, Andrea and Michelle who all come for gossip and sweets. With all the socializing and eating taking place, one wonders if Hannah makes any profits from her work for she doesn't mention having customers but indicates she gets many catering jobs.

Delores and Carrie are considering renting store space two doors down from Hannah's shop for all their antiques. When the three go to check it out, they discover some discarded scraps of cloth in the abandoned building:

"Hannah was grinning as she walked over to the pile of rags. It was clear that Carrie was still nervous about marauding rodents. As she approached the pile, she realized that the rags were covering something large and bulky. Did the owner leave some piece of equipment behind when they left Lake Eden? 'There's something under here,' she reported. 'Hold on a second and I'll take a look.'

"The rags were tucked around something, and Hannah managed to pull one corner free. She couldn't loosen it without using both hands, and that meant that she couldn't hold her phone flashlight. 'Shine your flashlight over here, Carrie,' she instructed. 'I'll need both hands to see what's here.'

"Carrie aimed the light at the pile of rags, Hannah put her cell phone down on the floor, and pulled on the largest piece. It was a remnant of a blanket, and it was tucked around something large. 'I got it,' she said, pulling the edge loose and flipping it back.

Further investigation shows it is the homeless man who was looking for odd jobs at Hannah's bakery. Hannah, noticing him moving, calls Doc at the hospital where he is taken. The three women head there and wait for Doc's diagnosis. Doc reports the man is suffering from starvation and close to collapsing, so he plans to keep him overnight to run tests and get him back on his feet. They all speculate as to who he could be and decide to do some sleuthing to try to find out his identity.

As the patient, whom they call Joe, is ruled out from having a traumatic brain injury recovers, Hannah and her friends and family make it their mission to learn more about him. Although they pick up bits and pieces he imparts, his identity is still unknown. Joe rebounds nicely after hearty meals and bed rest, all the while trying to regain his memory. Soon, with his comments and research, they believe they know where he had been living. But what happened to him to end up where he is?

This cozy mystery is written very simply though more is the telling of the situation than showing, which slows the plot, making it difficult and somewhat boring to comprehend. The saving grace to the novel is the many delightful and mouth-watering recipes the author includes. Perusing these sweet treats is sure to have the reader salivating without even consuming a morsel!