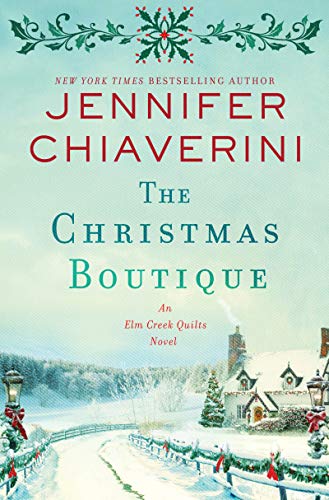 Though The Christmas Boutique is the 21st book in the Elm Creek Series, this enchanting Christmas tale can stand well on its own. A bit disconcerting at first if one hasn't read previous issues, the players soon become logical as the back story is included.

Sylvia Bergstrom Compson holds quilting camps at Elm Creek Manor, PA, at the ancestral mansion that was bequeathed to her. Her love for the craft is evident as is described with the many pieces she creates along with other members of her "staff" who are more like family.

Sylvia had enjoyed a loving and happy childhood growing up during the Depression and when she married James, they stayed at the manor with her father, her sister, Claudia, and Agnes who wed Sylvia's older beloved brother, Richard.

Where Claudia and Sylvia were often at odds, Agnes felt Sylvia's aloofness toward her, so she asked Sylvia to teach her how to quilt hoping they could bond. When James and Richard are both killed in the war, Sylvia could no longer remain at the home that left so many heartfelt memories, so she decided to continue her education, becoming a home economics teacher.

After Richard's passing, Agnes remained living with Claudia and her scoundrel husband, Harold, who began selling off the antiques and land in the manor. She was disturbed by this and needed a way out. When she meets a professor named Joseph who takes a shining to her, he proposes to her, though she tells him she cannot care for him as she did Richard. Before long they do marry, and he sets her up at his college to attain a degree.

Though this is her way out of a dreadful situation, she comes to love Joseph. When she discovers a one-of-a-kind quilt in an antique shop she remembered seeing before, she fashions one similar, finding her fervor for the art. Though she'd like to keep her find, she sets out to find the artist who crafted it and return it to her after it had been missing for decades.

Years pass with Sylvia now back in her homestead and couldn't be happier. She marries Andrew, a boy she adored as a girl and who happened to Richard's best friend. In the warmer months, her quilting camp has women from all over the country coming to learn the fine art of quilt-making, a passion of Sylvia's.

Now residing with her is Sarah, a young pregnant mother and her husband, Matt, the caretaker. Sarah loves being with her newfound close friends who will also prove to be excellent babysitters when her twins are born, but she is upset with Matt as he often deserts her to help his father at his construction company. Though her father-in-law is intimidating and wants Matt to take over his business, Sarah refuses to leave if it should come to that.

Quilter Gretchen and her husband Joe also are residents and work at the manor, and this close-knit group enjoys a wonderful camaraderie and love for each other.

Though offered a place to live, Anna, Sylvia's cook prefers keeping her apartment where she is friendly with her across-the-hall neighbor, Jeremy.

While everyone is preparing for the annual Christmas Boutique to be held at the Good Shepherd Church, a storm erupts with frigid temperatures causing the pipes to burst, making it uninhabitable. Diane, a quilter who is somewhat disagreeable, is determined to find the culprit who caused the flooding after turning off the heat in the building:

“'I've also learned who was present at the facility's committee meeting at Good Shepherd Church. We have eight suspects, but I think we can narrow down that list by applying a bit of logic.'

"Logic seemed to have nothing to do with Diane's wholly unnecessary investigation. [Agnes points out] 'Diane, dear, please don't call them suspects. According to Nancy and Melanie, the pastor says no crime was committed.'"

Sylvia solves the situation by opening her home for the event, and they are all elated to decorate and prepare for it.

Other quilters include Mary Beth and Diane, neighbors often at odds with each other, but the love of quilting is a connection they cannot break. Though the hostility between them is palpable, will they be able to work together for a good cause and overcome their differences?

The host of different characters offer their own points of view to enrich this heartwarming tale of friendships explored and history retold.