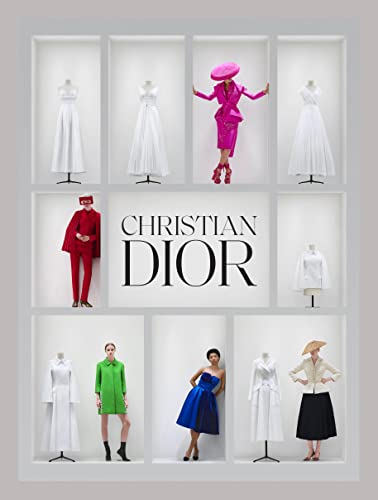 If you have a notion that everything that needed to be written about the late great Christian Dior and those who succeeded him has been already written, you would be absolutely incorrect in this assumption. Oriole Cullen and Connie Karol Burks offer up information, history, insights, and facts that most, if not all, of the other tomes based on the oeuvre of maison Christian Dior seem to either gloss over or totally ignore.

“There is no other country in the world, besides my own, whose way of life I like so much,” stated Christian Dior.

Of course, this book serves as a catalog for V&A Publishing’s paean to the designers and brand of Christian Dior and his affection for England. But in doing so, the authors weave aspects of designers and brands that have never been written about in depth.

The text is reasonably minimal or at least in keeping with the subject and is especially specific in calling out each year, designer, and season for each and every piece that is photographed in the monograph. There are vintage images of every variety as well as current ones, but the lion’s share of the pieces are photographed on headless mannequins, which gives the reader an incredibly clear opportunity to focus and understand what the DNA of the brand was all about.

The astute fashionphile will notice that St Laurent, Bohan, Ferre, and Galliano were most adherent to the legacy of the brand’s namesake. Simons and Chiuri seem to not quite understand who and what the eponymous designer was trying to do and say via his actual designs; in actuality their interpretations look far more dated than their predecessors. Unquestionably the former were the torch bearers that kept the flame of Dior ablaze, while the latter two seem to not quite spark the excitement or comprehend that Dior is not just about shape and embellishment.

Even though the pieces in the book are only from the V&A collection, there is enough to see and read about that one can state that this really is one of the must-have books dealing with the history of Maison Dior.

“The photographer Cecil Beaton, who took a close interest in the history of fashion and would later, and be responsible for donating a large portion of the V&A’s holdings of haute couture, offered to help secure some of the ensembles on behalf of the museum,” writes Oriole Cohen.

The authors and curators have done a superb job of representing all concerned as well presenting the creations in the most straightforward and approachable way. If there is anyone with a fashion library that does not include a book on the subject of Dior then this might be the one to own—even if is only a small piece of what has been produced under the Dior name.