The Chosen Few: A Company of Paratroopers and Its Heroic Struggle to Survive in the Mountains of Afghanistan 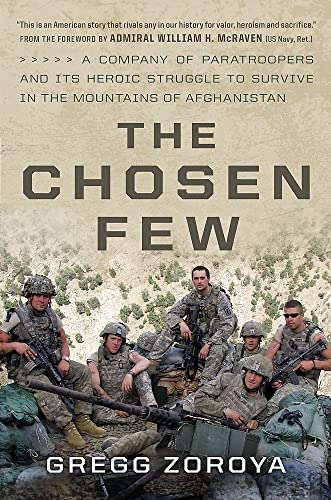 “As one of the most highly decorated units in Army history, these men are worthy successors to Band of Brothers . . .”

Recent American wars have produced long lasting and memorable small unit histories and personal memoirs. Books such as Company Commander and A Rumor of War have described the unique mix of terror, horror, and comradeship battle bestows on men, showing the brotherhood that close combat can bring to a company or platoon of men.

The wars in Iraq and Afghanistan are now producing their own volumes, and this is one of the better ones, recounting the tale of one of the most decorated companies of American soldiers in recent history.

Afghanistan in late 2007 and early 2008 was one of the most dangerous places in the world for American troops. As the attention of America and the world continued to focus on the “surge” in Iraq and the Bush Administration’s attempt to salvage a dangerous political and military situation, American forces in Afghanistan conducted “economy of force” operations, a military euphemism for fighting a desperate holding action in many parts of the country as Taliban and Al Qaeda forces made a surge of their own into the southern provinces of Helmand and Kandahar.

As a result of the scarcity of resources, including troops, helicopters, aircraft, and even drones, small groups of American troops often found themselves in isolated outposts in formidable terrain, fighting increasingly well-organized bands of Taliban fighters and their allies.

Chosen Company of the 2nd Battalion/503rd Parachute Infantry Regiment was one of these groups. Assigned to Nuristan Province in north-east Afghanistan, an area noted for its insularity even among Afghans, the Company soon found itself engaged in some of the most intense small-unit close quarters combat of the entire Afghan conflict.

A reader will immediately notice that a significant difference between combat accounts from Iraq and Afghanistan is that the Taliban were much better organized and often more willing to engage in direct combat with American troops than insurgents in Iraq.

The Taliban were definitely helped by the incredibly rugged terrain that favored the type of ambush and hit and run tactics the Taliban preferred, but the Americans at times actually placed troops in isolated Combat Outposts to deliberately provoke an attack, hoping to draw the Taliban out where superior American firepower could be brought to bear.

Unfortunately for the men of Chosen Company, the desire to draw the Taliban out sometimes worked too well, as the harrowing tales of combat actions in the book describe. On several occasions, including the final climatic Battle of Wanat, the Taliban were able to gather large numbers of fighters, use geography to their advantage, and nearly overrun several isolated American outposts. Only the fierce resistance of the American paratroopers and the timely arrival of artillery, helicopters, or aircraft to supply fire support prevented what could have been disasters for the American troops.

The well-researched and methodical description of the events leading up to the Battle of Wanat and the bravery of the American troops and their erstwhile Afghan allies that fought off an attacking force three or four times their number are the highlight of the book. The action Wanat in 2008 was one of the most notorious engagements of the entire Afghan conflict, leading to recriminations and even investigations by the Army to determine why the outpost was nearly overrun and heavy American casualties incurred.

The book does an excellent job of telling the entire story of the action, from the chain of decisions that led Army commanders to set up the outpost to the controversy of the post-action investigations and media firestorm the battle caused.

The book concludes with a postscript on the survivors of the company and the family members of the fallen, and shows just how much of a sacrifice these soldiers made on behalf of their country.  As one of the most highly decorated units in Army history, these men, many of them from broken families and rough backgrounds, are worthy successors to Band of Brothers from previous generations of American fighting men.