The Chosen: A Novel of the Black Dagger Brotherhood 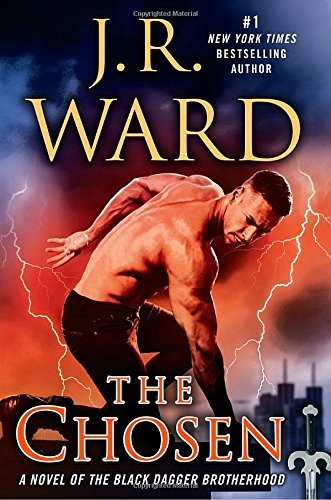 Layla, the titular character of J. R. Ward’s latest, The Chosen, is in an emotional bind. Torn between her feelings for the leader of the Band of Bastards and devotion to her children, she faces an untenable choice: Does she follow her heart toward love or family?

The Chosen is the 15th novel in Ward’s sprawling vampire drama and arguably the best story of the wildly popular Black Dagger Brotherhood (BDB) series in several years.

Following the dangerous birth of her twins, Layla is pining. Despite her deep love for her children and affection for their father, Quhinn, and his partner, Blay, she feels the loss of Xcor deeply. Knowing that he is being held prisoner deep within the hills on which they live by the Brotherhood is a torment.

When the chance arises to save her love, Layla has to choose between her easy life and constant contact with her children and life on the run with Xcor.

Ward brings both the heat and a satisfying depth with her latest novel. In a series this long, repetition is a dangerous possibility; the BDB novels have had a couple of these competent-but-not-particularly-inspired stories. With the near overthrow of the Brotherhood’s archenemies, the Lessening Society, a couple of episodes earlier, Ward breathed fresh life into her series. The Beast, the immediate predecessor of The Chosen, began this revival by fleshing out the always-present subtext of these books: the importance of family.

The Chosen is a reference to the title Layla once held, as a Chosen to the Scribe Virgin (deity of the vampires), but it is also a foreshadowing of what happens in the novel. The novel showcases a series of choices: love or family? Solitude or community? Arrogance or humility?

Though Layla and Xcor are the central couple in this drama, Ward widens her world beyond the common ‘will they or won’t they make it’ scenario, common in American romantic fiction. Her characters do not exist in a vacuum: they have connections beyond just their sexual/romantic partner, and choices always have consequences in Ward’s novels.

Ward’s writing is on point in The Chosen. Dialogue is crisp and often funny, and descriptions are evocative: it felt like, “someone had grabbed his [Tohr’s] snow globe and shaken it so hard that his inner flakes were whizzing around and refusing to settle.”

She’s also taken the societally risky step of keeping her characters’ actions and reactions real. Quhinn’s reaction to Layla’s romance is brutal and blunt, and his language is as non-PC as possible: “. . . you’re right. I didn’t want you, I’ve never wanted you—and don’t get it twisted. I’m not jealous, I’m ******* disgusted. I’m in love with a male of worth and I had to be with you because I needed an incubator for my son and daughter.” Harsh, yes, but completely within the parameters of the character Quhinn and within the world Ward created, where the well being of children is paramount.

Ward bucks common American romance novel plotting by following not only the romantic escapades of her characters (which are reliably sexy—Ward has a gift for sex scenes that are realistic), but their real lives: jobs, family relations, even recreational choices. She develops several plot lines aside from the primary thread, allowing opportunities for her characters to grow in this novel, establishing motivations for their actions, and setting up plot lines for later novels.

The only slight quibble is with the final chapter, which is jarring in its overly jolly tone. Perhaps in reaction to strong fan disapproval of the denouement of her novel called The Shadows, Ward’s final chapters of her last two BDB books have a bright tone that feels forced and unnatural, and is perhaps the only place where her characters act against the natures she’s established for them.

Regardless, The Chosen is a success. Its complexity, humor, and strong emphasis on relationships show Ward once again rising above the expectations of the genre. She’s built a world worthy of respect, and generally respects those rules she set up early in the series. Ward’s strong writing skills, particularly with dialogue and plotting, warrant an escape from the “pink ghetto” of being dismissed as a romance novelist. She is a writer. No genre definer necessary.