The Chosen and the Beautiful 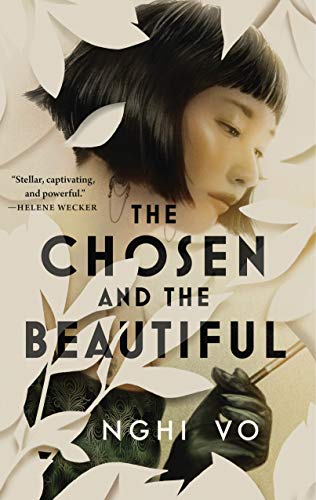 “The Chosen and the Beautiful offers up a lush glimpse of decadence and corruption, interrogating America’s dark history through the eyes of a narrator it is impossible to forget.”

“I smiled wide with my white sharp teeth, and I learned to laugh like the clink of champagne flutes, but even then I never had much interest in sweetness.”

With The Chosen and the Beautiful, Nghi Vo delivers a Gatsby for the new 20s: decadent, dangerous, and dripping with magic. Jordan Baker is a queer Vietnamese adoptee. She moves through the uppermost echelons of New York City society, a fixture, but never quite fully belonging to any one world, and seemingly content to party and flirt for the foreseeable future—despite the looming threat of another Exclusion Act on the horizon.

Vo’s 1920s New York City is richly portrayed, and her attention to detail grounds the reader as they follow Jordan from party to glittering party—but no parties are as grand as Gatsby’s:

“At Gatsby’s, the clock stood at just five shy of midnight the moment you arrived. Crossing from the main road and through the gates of his world, a chill swirled around you, the stars came out, and a moon rose up out of the Sound . . . to shine with sweet benevolence down on the chosen and the beautiful.”

Vo’s Gatsby is rumored to have made a literal deal with hell in order to gain his wealth. Regardless of the truth, the speculation reveals the soullessness of a society willing to go to great lengths to maintain its exclusivity. The original Great Gatsby by F. Scott Fitzgerald suggests this, but by weaving in the fantastical, Vo’s version feels just as, if not more, true. In fantasy, things can be more than they are; adding magic to Gatsby’s world emphasizes the opulence and the danger, both literal and moral, to a society riddled with racism, classism, and excess.

The events of Vo’s novel follow the same series of events as Fitzgerald’s The Great Gatsby, but readers do not need to have read the earlier novel to enjoy The Chosen and the Beautiful. Those who have read both will admire the ways in which Vo both evokes the spirit of Fitzgerald’s book, while also poking subtle fun at some of its more outdated views. Like Nick, the peripheral narrator in The Great Gatsby, Jordan’s story is also told in first person—but she feels considerably less peripheral. Gatsby and Daisy’s plotline play out in the background of her own story, intersecting and attempting to entrap her in Gatsby’s world, but never eclipsing her. Jordan Baker is entirely her own woman.

She is also just as flawed as the rest of the cast. Jordan’s gift for self-delusion unfolds slowly over the course of the novel. She is too smart to be totally unaware of her capacity for self-deception, but she initially conceals these deeper truths from herself and from the reader, instead offering them up as the narrative spills across the pages. The pace is at once heady and slow, reflective of the novel’s tone. There is a frenetic feel to the last third that mirrors the last few hours of a party—the glitter has faded, and Vo reveals the characters for who they really are with an honesty that is both tender and unflinching.

Perhaps the most enjoyable parts of the novel are Jordan’s observations about the people around her. At turns devastating, witty, and revealing, she charms the reader and those she interacts with, even while the reader is aware of the intense vulnerability beneath her façade. Of Gatsby, she observes:

“I knew there was something empty in him before, but now I could see that it wasn’t empty all the time. Now there was a monstrous want there, remorseless and relentless, and it made my stomach turn that it thought itself love.”

Ultimately, The Chosen and the Beautiful offers up a lush glimpse of decadence and corruption, interrogating America’s dark history through the eyes of a narrator it is impossible to forget.