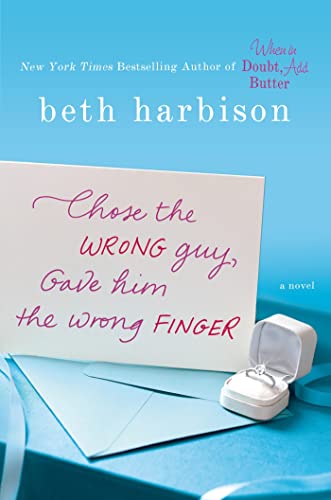 Ten years is a long time to hold a grudge or bear a torch, but Quinn Barton has done it handily. Long after finding out her fiancé was cheating and running off to Vegas with the best man (and the fiance’s brother) on her wedding day, Quinn is still living in the same small town, still working at her parents’ bridal shop, still brooding over The One That Got Away.

When a wedding brings both the fiancé Burke and his brother Frank back to town, Quinn is forced to face her past. Not content with that alone, her best friend, Glenn, encourages her to break free from her decade-long rut with a series of mostly hilarious Daily Challenges.

The most charming aspect of Chose the Wrong Guy, Gave Him the Wrong Finger is not the title (which is very good), but the wonderfully conversational tone of Beth Harbison’s writing. She has a knack for creating dialogue that is not only funny, but realistic—these are not characters who are overly slick, unbelievably glib. Quinn et. al. speak like normal human beings, albeit ones with a quirky sense of humor.

Ms. Harbison has also done exceptionally well at building a past history between these characters, especially given the length of the book and the pace at which the story clips along. This dynamic makes it easy to care about the characters, even when they are frustratingly whiny. It’s believable whining—anyone who’s gotten close to the fourth decade should be able to sympathize with Quinn’s clinging to a past love, even as we root for Glenn to get her moving.

In writing her flashback scenes, Ms. Harbison has chosen to use third-person narrative, in contrast with the first-person narrative of the present day scenes. Some readers might find that distracting, and indeed the first-person scenes were more compelling, as they played more firmly into her strength of using a conversational tone; however, none of the chapters were poorly written, and whether a reader is bothered by the change is largely a matter of taste.

All of the characters were well-drawn, particularly Glenn. It was very refreshing to read such a non-stereotypical portrayal of a gay man! Burke and Frank were maybe less well sketched, but as this is more chick-lit than pure romance, that is acceptable. Quinn’s life, not just her love life, are well-served by Ms. Harbison’s tale.

Aside from a few quirks with continuity that were hopefully corrected before the book went to print, there is little to dislike about this book. The ending of the story is not exactly out of left field, but it would have been nice to have more interaction with the person with whom she eventually ends up (to avoid spoilers).

Regardless, Chose the Wrong Guy, Gave Him the Wrong Finger goes down as an easy, breezy read, funny and charming, and perfect for a lazy day in the hammock or at the beach.