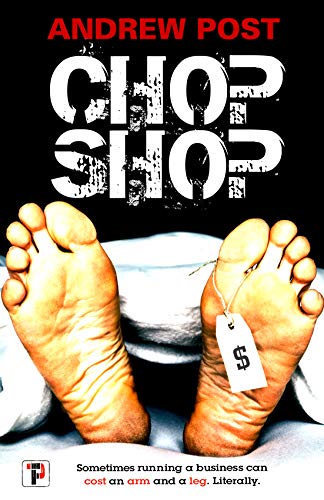 If Carl Hiaasen, James Crumley, and Tess Gerritsen got totally wasted and decided to co-author a book, this might be the result.

Chop Shop is violent, tasteless, twisted, and laugh-out-loud funny. Amber Hawthorne inherits a funeral home from her father and she and her college BFF, Jolene Morris, take over the business.

Both women apparently majored in screwing up, and through a combination of bad choices, bad luck, and Amber’s drinking problem, they run the funeral parlor into the ground. They think they’ve hit rock bottom when their furniture is repossessed on a day where they have two funerals scheduled and no chairs for attendees. They’re wrong.

Shawn aka Slug (It’s tattooed on his arm!) suggests they start selling body parts from the deceased to the ready and lucrative market for kidneys, hearts, and other organs. After all, he points out, the dead people won’t miss them. What can possibly go wrong?

Frank Goode is a former doctor who lost his medical license and served two years in prison for dealing drugs. Now he works at the local box store and performs clandestine surgery for mobbed-up thugs and the occasional abortion for their girlfriends. Unfortunately, Simone, of the Pescatelli crime family, lies in his recovery room when Vasily, a member of the Petrosky crime family, comes in with a bullet wound. While Frank sleeps after performing the surgery, Simone shoots Vasily and flees, leaving Frank to face the furious family.

Ted, who sells Frank his under-the-counter medical supplies, gives him Amber and Jolene’s contact so he can dispose of the body before Vasily’s friends find him with a bullet through his head, hard to explain when he was brought in with a shot to the groin. Frank gives the body to the women, and things go downhill from there.

Post’s supporting characters are so twisted that if they moved in next door, they would give your dog mange. Most of them are likeable for whole seconds at a time. They just want to make a living—or, maybe, a killing—and go on as long as they can.

The dialogue in which we try to follow their logic and decipher their philosophy of life is both side-splitting and terrifying. The speeches are far too long, but they’re part of Post’s stylistic fabric in this Monty Python meets Grand Guignol world. His dark humor and ear for language make it work.

So does his plotting. Characters tend to have three options in this book: bad, worse, and not quite the end of the world. They unerringly choose the latter, leading to another similar choice. It’s funny as hell only because we aren’t the ones going through it.

The body count rivals the Tet Offensive. Amber and Jolene struggle to keep the business afloat even though they’ve wandered into far deeper water than they’re used to navigating. Frank struggles to protect his estranged ex-wife and daughter from the wrath of the mob with only slightly more success. The supporting cast keeps the action and subplots churning until the logical but unexpected final catastrophe.

Post seems to love these people, radioactive warts and all, and we all benefit from his concern.