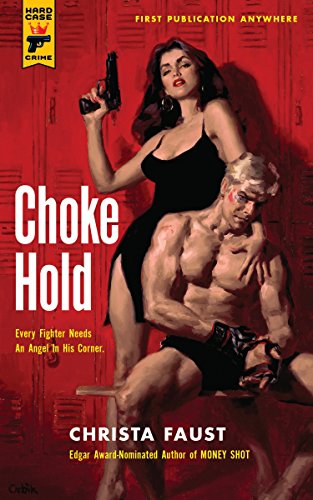 “Although noir was once a genre dominated solely by male writers, Ms. Faust’s liberating writing brings new substance to pulp fiction. Even if Choke Hold does not sit on your library shelf for long once it is finished, it is a fast, captivating read for a cold night.”

Angel Dare keeps a low profile, not because she wants to, but because she has to. When Vic, her ex-lover walks into the dump of a restaurant where she works just outside of Yuma, AZ, she is stunned not only because of his appearance, but because he’s there to meet his estranged son, Cody.

As she wrestles with the idea of Vic even having a son, three Latinos enter the restaurant, pull their guns, and shoot Vic as well as Angel’s boss. The ensuing gunfight ends up with two Latinos dead, and Angel, Cody, and a badly wounded Vic racing away from the restaurant with the third gunman in hot pursuit. Vic does not survive, but his dying request is that Angel takes care of Cody.

Cody and Angel arrive at the home of Cody’s friend, Hank “The Hammer” Hammond, a washed out fighter with an ugly mug and a body that won’t quit—at least not in Angel’s mind. Cody informs Angle that he’s to appear in a fight video in Las Vegas that he believes will make his future, but other events intervene. Within hours, unsavory men show up at Hank’s place looking for Cody, and they aren’t cordial in their demands.

Angel quickly learns that the man Cody is working for also dabbles in smuggling illegal substances, from cocaine to steroids, and Cody is suspected of helping himself to the product. Cody is taken by force to Mexico where he is to throw a fight for his mentor, and the race is on as Hank and Angel follow the trail to Mexico and rescue Cody just as his abductors are ready to lower the curtain.

In the meantime, dastardly characters from Angel’s past catch up with her, and she is now pulled into a series of chases involving both Cody’s abductors and her own nemeses. Along the way, Angel feels no compunction about defending herself and Hank and Cody to the ultimate: killing those who get in their way.

When the trio finally arrives in Las Vegas, Cody discovers that his big chance in the ring is nothing more than an audition with hundreds of other hopefuls – no guarantees about his future. Time begins to close in on the three of them when Angel’s nemeses corner her and abduct her. Death continues to follow her to the most remote areas of Nevada where she slips through its bony fingers to make her escape, leaving others behind to a dismal fate.

Ms. Faust’s descriptions are evocative and vivid, and she plants a picture in our head before we even realize it: “The landscape was mostly dull, agricultural. We passed the Kikima Casino that Cody had mentioned, a squat, glittery building that had the used-up, shabby glamour of a hooker in the morning.”

Her characters are live and three-dimensional; they are people we learn to care about, maybe even like to some degree, regardless of their behavior and where their seedy lives are taking them; others, well, not so much.

Choke Hold is not for everyone, but Ms. Faust’s following will enjoy reading this adventure. Readers unfamiliar with her style, but who enjoy the pulp fiction feeling of this type of book will be fascinated by the many twists and turns of the story as well as by her graphic manner.

Although noir was once a genre dominated solely by male writers, Ms. Faust’s liberating writing brings new substance to pulp fiction. Even if Choke Hold does not sit on your library shelf for long once it is finished, it is a fast, captivating read for a cold night.