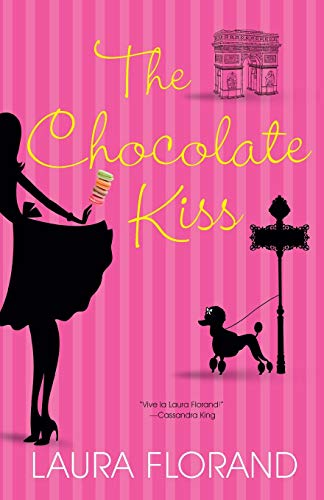 “The Chocolate Kiss is a Parisian confection filled with delights.”

“Charming” is the word that most readily comes to mind upon reading Laura Florand’s The Chocolate Kiss. It would be quickly followed by “magical,” “funny,” and “romantic.”

Magalie Chaudron is a fiercely self-protective and self-contained woman. After a childhood of alienation, she’s finally found a home and solid bedrock in her aunts’ tiny Parisian salon de’ the, La Maison de Sorcieres.

Unfortunately, even their reputation as witches is not enough to keep world renowned pastry chef, Philippe Lyonnais, from opening a shop down the street from their stronghold. Defeated in her attempt to drive him away, Magalie is faced with the twin problems of maintaining her refuge and resisting Philippe’s charms—both pastry oriented and personal.

The Chocolate Kiss is a Parisian confection filled with delights.

From the first chapters, Ms. Florand weaves an enchantment with words. Phrases and sentences like “If he should shrug his shoulders, the whole shop might burst off of them, like staves off a barrel,” and “. . . one must always know when to yield magic into the hands of . . . children” jump off the page.

Her descriptions of the confections created by Magalie and her aunts, as well as those created by Philippe, are sensual in the best sense of the word. Ms. Florand makes it very easy to visualize her treats, and does so in a manner that is not remotely over descriptive. As well as she describes her taste creations, she’s even better at her evocation of Paris, particularly the Ile St-Louis, the setting of the majority of the story.

Ms. Florand’s characters are fully fleshed and relatable, even minor characters like Magalie’s aunts. Particularly charming is her Aunt Genevieve, a feisty older woman who is determined to live by her own rules.

Magalie is a very believable roil of emotion: half American, half French, she’s determined to stay anchored to the first solid ground in her life. Though it would have been very easy to make Philippe the stereotypical romance novel alpha male, Ms. Florand creates a character who is justly proud of his heritage and confident enough to stake his own claim to fame, while remaining open to love and life.

There will be the inevitable comparisons to Joanne Harris’ Chocolat, but they would be specious. Ms. Florand shares Ms. Harris’ gift for expressive description and mature world building, and of course both deal with chocolate and France, but the comparisons should end there. The Chocolate Kiss is a very different style of book (though not lesser). It is solidly a romance, with the relationship between Magalie and Philippe at the heart of the novel, other concerns being peripheral.

There could be a quibble that the final scenes of the book are not quite in character, but it would be just that: a quibble. Perhaps Ms. Florand was putting the final bonbon in her gift of love for readers. At any rate, she’s created a charming, romantic story that should delight any reader.