Chocolat: From the Cocoa Bean to the Chocolate Bar 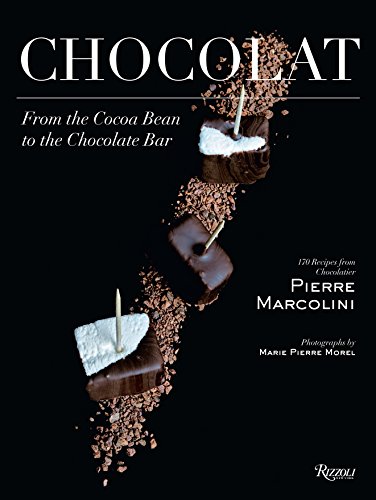 “By educating and inspiring you, Pierre Marcolini is doing a great service to the blossoming bean to bar chocolate movement.”

There has never been a better time to be a chocolate lover.

Like grapes exposed to different soil and climate conditions, cacao beans also have varying tasting notes. It is with a keen appreciation of these difference along with a personal relationship with the growers as well as the skill to turn the beans into an edible form that distinguishes a merely good chocolate maker from a great one.

And among the greatest chocolate makers is Belgian chocolatier, Pierre Marcolini, who was an early pioneer in the so-called bean to bar chocolate movement when he began to travel the globe in search of the finest cacao beans for his specialty chocolate shops in Brussels, which opened 20 years ago.

To celebrate the 20th anniversary of Maison Marcolini, Mr. Marcolini has wriiten Chocolat: From the Cocoa Bean to the Chocolate Bar. It is both a love letter to his craft and the ultimate guide to chocolate appreciation. It is also one of the best single-subject cookbooks to come out in a long while.

Unlike many chefs who write a vanity cookbook to cap their illustrious careers, Marcolini has written a book that is as practical as it is beautiful. This is one that will not end up gathering dust on your coffee table. That said, it is almost a shame that the book is so big and heavy because it makes it harder to enjoy. (You aren’t going to curl up in bed with a 9 x 12-inch five-pound book.) But keep it where you can reach for it easily whenever a craving for chocolate strikes.

The book is divided into three parts. First, there is a fascinating but brief history of chocolate that covers how beans are grown, harvested, and finally made into chocolate bars. For novice chocolate eaters who have never seen a cacao tree with its pods this section was positively enlightening thanks to the stunning photography of Marie Pierre Morel. The brief recap of the chocolate industry is equally revelatory. Get this, for example: The first chocolate bar was produced in 1847 by the Fry company in England. Yes, England.

From there, Marcolini covers how to make your own chocolate bars at home in Bean to Bar at Home. No doubt there will be scores of chocolate enthusiasts who will be eager to try these techniques but for most of us we can just skip to the extensive recipes provided in the third section.

This is where it gets especially interesting for those of us who want to understand the taste differences in cacao beans grown in one part of the world versus another. With an oenologist’s approach to cacao, Marcolini explicates the four main varieties of cacaos and their terroir:

“Just like the world of wine with its appellations and varieties, cacao is full of single-origin grand crus grown from specific varieties on different terroirs. Climate, soil composition, and farming practices all have a significant influence on the flavors of the chocolate that will be made from the cacao plants.”

Now don’t you already feel like you are a smarter chocolate consumer?

From there, he matches and provides recipes for each of the ten grand cru cacao beans he has personally selected with, of course, tasting notes at the beginning for each. Here is where you learn what terroir can do for a given variety.

Take the variety Trinitario, for example. The Trinitario Bahia Grand Cru from Brazil has the following tasting notes: “Its acidity is balanced, and it has a subtle bitterness.” The flavor profile is “tropical fruits (passion fruit, banana) and nuts (walnuts).” Whereas the Trinitario that is sourced from a planation in Cuba, Trinitario Terruño de Baracoa Grand Cru is described as having an “extraordinary nose [with] pronounced bitterness.” Its flavor profile has “notes of dried wood, hazelnuts [and] is full-bodied. Billows of tobacco smoke.”

Let there be no doubt: chocolate is the new wine.

That said, sourcing fine chocolate with the same flavor profiles as Pierre Marcolini uses is out of the question. Still, do what you can and give some of his recipes a try—they are surprisingly accessible. The bad news, of course, is that you will want to keep the book a safe distance away from your work area. This isn’t a book that will be enhanced by splatters. In fact, once you try out a few recipes it would probably be worth copying them to your recipe file to keep the book pristine.

Cookies with Chocolate Chips is not your Tollhouse variety. Think Mexican Wedding Cakes with chopped dark chocolate. Made with lots of butter, flour and confectioners’ sugar, these were heavenly on their own, but would make for a sophisticated cookie to go along with a good bowl of ice cream as a dinner party dessert.

The recipe called for Criollo Blanco grand cru (78% cacao) but I used a bar made from Trinitario  cacao and it worked just fine. I also added a teaspoon of Maldon sea salt in lieu of the butter with sea salt crystals that was called for. The results were terrific—the combination of good chocolate enhanced by a salty kick cannot be beat.

The baking time, however, seemed a little off, as did the oven temperature but this is a minor quibble when the result is a cookie this good. (I ended up cranking up the oven to 350˚ from 325˚and baking several minutes longer.)

The Herby Chocolate Drink was equally good and not your run-of-the-mill hot chocolate. (It is so much fun to rework old standbys like chocolate chip cookies and hot cocoa.)

But what was really exciting was the Cod Filets with a Cacao Nib Crust. You know a recipe is a winner when you are still thinking about it the next day. First, get yourself the best cacao nibs you can find. Again, do some looking online as it is doubtful the nibs you can get in a health food store will be good enough. The crust is made with the cacao nibs, orange and lemon zest, freshly ground white pepper (Sarawak), and fleur de sel. (The Sarawak pepper gives some good heat so be careful not to overdo it.)

Second, trust the cooking method, which is to steam the cod in the oven by placing it on a damp cloth at 320˚. The cod—which I cooked for a total of twelve minutes as opposed to the seven minutes in the recipe—was moist and juicy and the crust was superb. I served it with some carrots glazed in orange juice with a little bit of garlic and lightly crushed cardamom seeds. It was very simple to execute and would make quite a statement at your next dinner party. People will think you have gone to cooking school.

These are but three of the 170 inspiring recipes you will find in Chocolat. While packaged like a coffee table book, it is absolutely chock full of seductive, doable recipes.

Spend some time with it and your enthusiasm for craft chocolate will grow exponentially. Which is the point. By educating and inspiring you, Pierre Marcolini is doing a great service to the blossoming bean to bar chocolate movement. And there’s nothing wrong with that. Everyone’s a winner.