The Chinese Question: The Gold Rushes and Global Politics 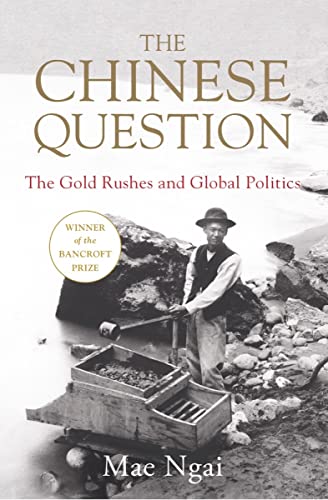 “This book will help the reader understand a troubled past and see contemporary conflicts between China and the West in a broader perspective.”

Gold was mined in Bulgaria and esteemed in Egypt and Rome long before Christ. In more recent centuries it was valued and mined in Peru, Mexico, Indonesia, and Siberia. But it was the discovery of significant deposits in California, Alaska, Australia, and South Africa in the second half of the 19th and early 20th centuries that drew Chinese workers and, in time, Chinese entrepreneurs and firms to travel across oceans to take part in the gold fever. Commerce was making the world “flat.”

California’s Gold Rush in 1849 and subsequent discoveries elsewhere helped to confirm what Karl Marx wrote one year earlier in his Communist Manifesto: Capitalism was making the world interdependent. This book illustrates how rushes for gold brought Chinese into the gains and vulnerabilities of trade and other exchanges across borders.

Chinese emigrants living abroad in the Anglo-American world were not marginal actors in the last decades of the Qing dynasty. Those who joined the gold rushes were among the first Chinese to experience the West first-hand. Their participation in the gold rushes in North America and Australasia in the late 19th century and in the revival of the gold industry in South Africa in the early 20th were integral to a new era of long-distance migrations and global trade that transformed international finance and political relations.

Many Americans and other whites in the English-speaking nations tended to look down on Chinese workers as “coolies”—at best, servile robots or, at worst, cunning criminals. But most Chinese, no matter their schooling and status, tended to be rational, hard-working, law-abiding individuals trying to better themselves and provide for their families in China.

Of course, there were misunderstandings due to language and cultural differences. Many English-speaking Christians disliked and distrusted what they saw as Chinese “heathenism.” There was also the fact of competition. Many whites feared they would find less gold or obtain lower pay due to the influx of Chinese. Not only did whites harass and attack Chinese but, eventually, the US and other governments passed Chinese exclusion laws—not removed until 1943 in the United States, not relaxed in Australia or South Africa until the 1970s.

How did all this shape world politics and economics? Chinese gold miners contributed to the global financial hegemony of Great Britain, and then the United States, based on the power of the gold. Their contribution was doubly ironic. At one level, the gold rushes both materially and symbolically consolidated the shift to gold-based trade and investment in the global economy, which disadvantaged China. At another level, the presence of Chinese on the goldfields and in other industries gave rise to racial conflict and discrimination, violence, and finally, legal policies of exclusion from immigration and citizenship policies that also disadvantaged China.

Author Mae Ngai, a history professor at Columbia University, concludes that Chinese exclusion did not directly cause either the West’s rise or China’s decline. But it was part of a constellation of policies that privileged Anglo-American settler nationalism, and that contributed to China’s oppression in myriad ways. The exclusion laws, moreover, look large in 19th century Chinese history because they were, along with the unequal treaties, the most potent symbols of China’s humiliation on the global stage. What Chinese leaders portray as a “century of humiliation” helps fuel Xi Jinping’s campaign to make China great again.

Until 2006, South Africa was the world's largest producer of gold, but China is now the world’s largest producer, followed by Russia, Australia, and the United States. However Chinese individuals and firms still mine gold abroad, for example, in Ghana, where fifty thousand Chinese went to do small-scale mining between the mid-1990s and 2013. Some of the work is permitted by law as Chinese entrepreneurs join with locals, but some is judged illegal. A few years ago, Ghana deported some 4,500 Chinese amid alarms about predation, exploitation, and even colonialism in Africa. But many Chinese prospectors moved to remote areas, protected by local chiefs. Another raid in the Ashanti region in 2018 snared a thousand illegal Chinese miners.

Besides small-scale gold mining, Chinese also engage in industrial gold mining in Africa. But mining ranks third among China’s African interests after infrastructure (roads, railroads, ports) and energy (oil and gas). These projects form part of China’s Belt and Road Initiative announced by President Xi in 2013—both praised and critically evaluated by some observers.

The Chinese Question has been revived and repurposed in the 21st century. The specter of a new yellow peril infuses some depictions of China as a threat to US and global security—recall Donald Trump’s references to the “Chinese virus.” Ngai explains how the Chinese Question, originating in 19th century racism, colonialism, and capitalism, now informs nationalist competition between China and the West.

Professor Ngai has analyzed the “Chinese Question” based on more than a decade of research in government archives and university library collections in California, Canberra, London, Oxford, Pretoria, Taipei, and Washington, as well as the Overseas Chinese Museum in Guangdong. On this issue she has read dozens of periodicals published in many places including Honolulu, plus hundreds of books and articles. She seems to have ignored no relevant source to arrive at her big picture.

This book will help the reader understand a troubled past and see contemporary conflicts between China and the West in a broader perspective.