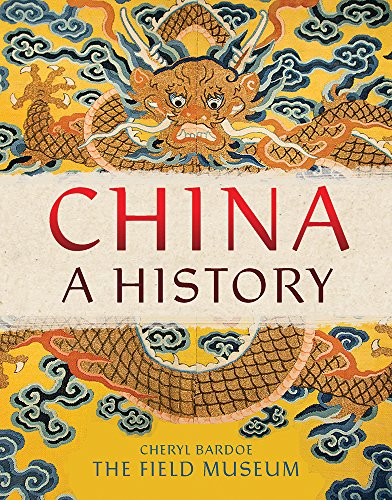 “To say that this book is a small gem of understanding China’s history would be a major understatement.”

It’s hard to think of the history of China explained in a 176-page book, but indeed, Cheryl Bardoe presents just that. Although published more for young readers, this history is thorough, interesting, and informative for readers of all ages.

Bardoe begins this journey in prehistoric China, tracing human existence to seven hundred and fifty thousand years ago. In seeking the roots of Chinese history, Bardoe focuses on the Yellow River, where “scholars . . . considered the Yellow River Valley to be where Chinese cultural traditions or civilization began.”

Archaeological sites provide to civilizations through discoveries such as clay potteries. “The oldest known pottery in the word was found in Jianxi Province and dates back twenty thousand years . . .”

It was during the Neolithic period that daily life in China developed through “pottery, settlements, and farming . . .” as well as trade and the movement of people.

Chinese development progressed further with the rise of dynasties that both unified and divided the Chinese people. As communication became easier, educational academies grew and flourished. Through this, “Core ideas that developed during the Bronze Age were used to govern China’s vast empire for thousands of years.”

Eventually, seven large states evolved in central China, dominated by the Qin state, ruled by Qin Shi Huangdi, the first emperor. The Qin Dynasty did not survive long after Huangdi’s death in 210 BCE, and was soon followed by the Han Dynasty that lasted more than 400 years.

Although successful for over four centuries, there were several things that contributed to the fall of this dynasty. “Deadly floods and crop-gobbling locusts besieged the countryside, and peasants revolted when the government couldn’t keep up with relief.”

Bardoe traces an interesting section relating to life in the dynasty courts and the pressures of those in attendance. One of the interesting discussions is about the role of women in court life. While the book focuses a great deal of attention on male figures, Bardoe identifies several influential women who made lasting impressions on Chinese life.

In particular, Lady Hao “was a powerful woman and military leader during the Shang Dynasty.” While she was highly respected in her role, “unfortunately, historians also suspect her of murdering four young princes who held claims to the throne.” Impressive women, indeed!

Another influential group that Bardoe gives attention to are the eunuchs. Castrated and unable to father children, this group of men were the only ones (besides the emperor) allowed in the women’s quarters. They therefore maintained a trusted place with the emperors.

Faith and beliefs played a major role in the development of Chinese culture, in particular, Confucianism, Taoism, and Buddhism. Confucianism emphasized order, “mutual respect, cooperation for the benefit of society, and obedience to parents and authority;” Taoism harmony, “encourage[ing] people to embrace the natural life force of the universe.”

Buddhism did not have its origins in China but in Nepal and India. It “teaches that every action someone takes evokes karma. . . . The ultimate goal is to reach nirvana, a state of enlightenment that allows a soul to finally escape this cycle of death and rebirth.” These three beliefs continue to play a vital role in Chinese culture.

Bardoe devotes Chapter four to China’s place on the world stage, which she contends began as early as the 1400s. Early dynasties focused on “establishing authority, trade patterns, and defenses close to home.” Once trade began to cultivate a national flavor, trade routes were established along what was referred to as the Silk Road. Silk was a product greatly prized by the outside world, and made trade easy for imports back to China including “precious gems, spices, and unique materials for perfumes and cosmetics.”

As all things must come to an end, “more than three thousand years of dynastic rule in China had ended . . .” in 1912. As the 20th century crept up on China, outside forces proved pivotal to China’s existence and “governing systems that included more citizen representation” became the rule of the day.

Bardoe ends her journey with a look to the future as she discusses China’s economic growth and rise in cities. China’s influence will be affected by “a combination of environmental factors . . . and ongoing, never-ending human ingenuity.”

To make understanding this book easier, at the end Bardoe provides a time line of important events and activities that move from 18,000 BCE through 2008 CE.

To say that this book is a small gem of understanding China’s history would be a major understatement. Regardless of age, anyone who is interested in China’s role in world history through today’s conflicted environment should read this book. It won’t take long and is well worth the journey.