The Chill: A Novel 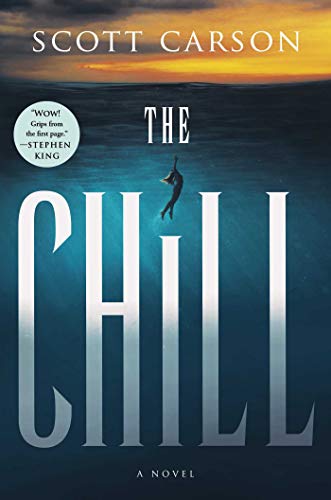 “The Chill would’ve made a great disaster movie back when that genre of motion picture was popular.”

Under the waters of the Chilewaukee Reservoir, nicknamed The Chill, the town of Galesburg has lain submerged for over 20 years now. A terrible conspiracy of murder was carried out in Galesburg, an act that didn’t stop the waters of The Chill from covering it.

Now it appears Galesburg will finally have its revenge.

County sheriff Steve Ellsworth thought things couldn’t get any worse when he bailed his son Aaron out of jail but in a few hours, he receives a phone call from Aaron proving how wrong he is.

When Steve gets to The Chill, and Aaron explains what happened—he struck a stranger who fell into the water and drowned—things that looked bad turn to confusing when the stranger walks out of the woods very much alive.

District police officer Gillian Mathers, called to the scene by Steve, isn’t certain what to do, especially since Aaron also insists he met a photographer taking pictures of the dam.

“Haupring?” she said, and then wished she hadn’t spoken. She knew better than to speak of such things.”

Haupring was the photographer who took pictures 20 years before when the town of Galesberg was burned to the ground so the area could be flooded when the new dam was built.

Things get more confusing when Aaron insists he tried to rescue the man who fell into the water and found instead a bound skeleton with a hood over its head.

Divers bring up the bones. At least that part of Aaron’s story is true, but whose body is it?

Meanwhile, Mick Fleming has problems of his own. He’s been sent to inspect the dam, and what he finds is not good.

“The dam’s age and the rising water levels made demands on the spillway that had been on the critically endangered list for years. If it keeps raining, what’s left on the scale of concern? Catastrophy?”

In New York, Gillian’s father, sandhog Deshawn Mathers, encounters odd happenings in the tunnel being dug so New Yorkers will have good drinking water. He’s been seeing things, people long-dead, fellow workers who’ve died in the tunnels, and they’re asking for his help.

The skeleton in The Chill is discovered to be Gillian Mathers’ grandmother, who disappeared 20 years before, bringing back to Gillian memories of things she was taught as a child as she struggles to add the facts.

A man with the name of the photographer who captured the images of a drowned town. A woman raised to believe she must keep the story of the drowned town alive. An engineer whose grandfather designed the original dam. A man working the tunnels under New York City, a man who married the granddaughter of the man who singlehandedly tried to prevent the flooding of Galesburg. Have these people been brought together for a reason?

Gillian’s theory: “The dead can dig the tunnels, but they need water to help. They come back when the math is right. Remember the Mayan Calendar story?”

“Yeah. Supposedly it stopped in 2012. People thought it was the end of the world.”

“Our myth about Galesburg is similar. It’s the moment when an equation works. The equation is here.” She tapped the board with a finger.

She didn’t laugh. “It’s not a year. It’s a water level. Height above normal pool level. When it reaches 20.17, the water will be released. Toward the city.”

The rain continues, and the water level keeps rising, and Gillian and Aaron have to fight nature, fate, and quite a few ghosts to prevent disaster.

“Head for the hills. The dam’s busted!” Two phrases often used for comic effect in stories set in the hill country. In The Chill, that phrase is all too real and there’s nothing amusing about it.

Blending myth with actual facts, Scott Carson has woven a story using one of nature’s most awful disasters combined with human greed and unconcern for the safety of his fellow man. Adding a supernatural element is icing on the cake.

The Chill would’ve made a great disaster movie back when that genre of motion picture was popular. As it is, it makes for a read that is—no pun intended—chilling. Such an event could, and has, happened often in the history of human endeavor. The Chill is a great tale, not of man’s inhumanity to man, but of man’s inhumanity to nature. Now, nature, with some supernatural assistance, strikes back.