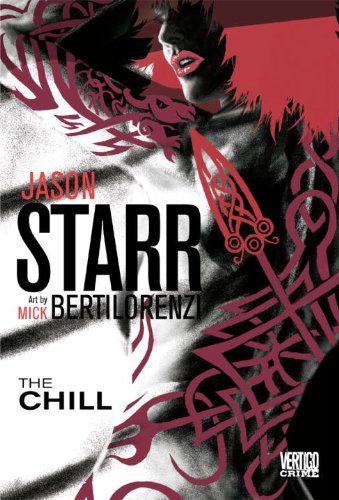 Of the three Vertigo Crime graphic novels I’ve read to date, The Chill is by far my favorite. From the subject matter to the writing to the art, the whole package just works.

As far as I know, this is Jason Starr’s first foray into the world of supernatural fiction, and he hasn’t held back. The storyline is an exploration of Irish mythology and how it could play out in modern society. We’re introduced to the ultimate femme fatale, a series of brutal killings in New York, and a police force completely stumped by all the conflicting evidence. Could it be that one Irish cop from Boston with a penchant for Jameson is the key to uncovering the truth?

Read it and find out.

Jason Starr’s association with Ken Bruen shines through in the writing of this graphic novel. Convincing vernacular, Jameson whiskey, a startling pessimism toward human nature—really, Starr’s done this job as well as any black-hearted Irishman could. Starr balances the reader’s perception just enough to sway sympathy away from the victims. At times, it’s actually quite easy to root for the murderer. By the final chapter, you just don’t know who should come out on top.

As mentioned earlier, Mick Bertilorenzi’s artwork is terrific in The Chill. Good clean lines, soft gray shading and the perspective in a lot of the action frames truly impresses—cinematic. Particularly impressive are the frames that don’t contain any dialogue. Real ”show don’t tell” stuff. I’m not sure how much of this is dependent on Starr’s script direction, but whatever way the effect is achieved, both artists are very well matched. More from each of them in this medium would be welcome.

By the way, a lot of the scenes are highly sexual and this reviewer’s inner teenager would have killed for a copy of this. But from a respectable adult’s perspective, the eroticism matched the tone without being gratuitous. Bertilorenzi’s artwork really adds to the dark beauty Starr presents in his writing.

So, if the weather outside ain’t frightful enough for you, get your mitts on a copy of The Chill. It’ll fairly put a tingle in your spine. Best treated with a wee hot toddy, by the way.