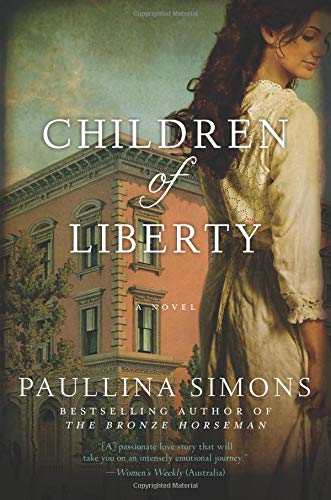 “Children of Liberty might hold some intrigue for those interested in Alexander’s parentage, but it’s unlikely to hold the attention of most anyone else.”

It is 1899. The Attaviano family arrives in Boston from Italy, determined to make their way in the New World, to fulfill the dream of their patriarch.

As they step off of the ship they are met by two dashing young American men who offer them shelter and help finding jobs. Both are immediately smitten with 14-year-old Gina Attaviano. She in turn is smitten with America and its possibilities.

So begins Paullina Simons’ Children of Liberty, the prequel to her bestselling The Bronze Horseman series. And in Children of Liberty Ms. Simons delivers on her promise to explain the expatriate parentage of the hero we met in that first book, Communist Officer Alexander.

Unfortunately, the side story that sounded intriguing in that series is rendered bland and unbelievable in this novel.

Harry Barrington, Alexander’s father, is developed as an especially unpalatable character. A rich, entitled heir to a great American fortune and heritage, he is a wishy washy fop, unable to complete either his degree work at Harvard or his marriage to a daughter of a good family. He’s pushed around by his father and his friend, Ben, laughed at by his sister, and generally spineless. These characteristics make him a particularly unbelievable in his role as a “revolutionary,” whether it is in his sudden embrace of the Industrial Workers of the World or his equally sudden marriage to Gina and subsequent break with his family.

Gina (later Americanized to Jane) Attaviano presents a little better than her future spouse. Fortunate enough to have had a father who insisted his family learn English against the day that they would travel to the brave New World, she enters America with her eyes and hands open.

Smart, spunky, and talented, Gina moves up quickly in the factories of Lawrence, Massachusetts, and later in Boston. Gina loves her new life and the attention she gets from Harry and his friend Ben. When she settles on Harry it is a surprise for from the outset of the novel, Ben is presented as the more likable young man.

Gina’s love of her relative freedom in America rather rapidly morphs into a fascination with what she regards as the true freedom of socialism, and she draws the slightly anarchistic Harry along with her.

There are several other problems with Ms. Simons’ novel. Though she still demonstrates the fine grasp of history she displayed in The Bronze Horseman, in this novel it’s tainted by an almost Forrest Gumpian tendency to relate an unbelievably high number of historical figures and events to these two families.

Harry’s progenitors created Boston and Harvard; Ben’s uncle is Robert Gould Shaw, “the man who commanded the only all black regiment in the Union Army during the Civil War.” The speaker at Ben’s Mother’s ladies’ club is W. E. B DuBois, and Ben himself becomes close to Teddy Roosevelt.

Mention is made of so many prominent figures and events that it becomes almost comical. Is it possible for even the most influential of American families (or their friends) to have a hand in every event for over a century?

Even more problematic is the dialogue. A brief example, coming from Gina’s mother, a recent immigrant: “Yes, paved with the red blood of martyrs, as your father would say . . . Paved with the igneous lava remains of the sinners’ post-apocalyptic bones . . .” A mouthful for anyone; even more so for a barely literate woman. The characters deliver ponderous monologues with regularity—even everyday interchanges are stilted and wordy.

The bright moments in this novel are the provenance of the secondary characters, most particularly Harry’s friend Ben and his sister Elaine. They are human and likeable; though each has their own trials, they are handled fairly believably. Neither character is a perfect human being, making them the saving grace of a fairly dull book. This book is obviously a set up for another (and likely a trilogy); hopefully these last two characters will stick around to save those novels, too.

Lightning struck for Ms. Simons with The Bronze Horseman. Her grasp of Russian history and the personal family stories of her grandparents endowed most of that book with a realism that was interesting and refreshing. Unfortunately she could not carry that momentum forward in this prequel.

Children of Liberty might hold some intrigue for those interested in Alexander’s parentage, but it’s unlikely to hold the attention of most anyone else.