Child of Light: A Biography of Robert Stone 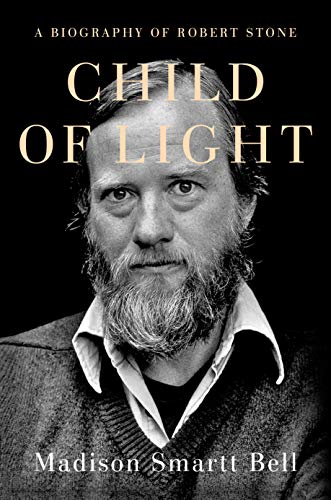 Robert Stone seemed to come out of nowhere when he published his first novel, A Hall of Mirror in 1967, though he had a substantial apprenticeship, including a couple of years in the famed fiction writing program at Stanford.

He was a disciplined writer and a voracious reader who taught himself the craft of fiction. After he became famous, Stone joined the faculty in the creative writing programs at many universities across the U.S., a story that Madison Smartt Bell, himself a writing teacher, tells well in his exhaustive and exhausting biography of Stone.

Nearly everything factual, including precise dates that a reader might want to know about Stone is detailed in Child of Light, which could just as easily been titled Child of Darkness. Few American fiction writers in the second half of the 20th century were as dark as Stone or as popular among readers who enjoyed the works of Joseph Conrad and Graham Greene.

When Stone looked back at what has been called “The American Century,” he saw a lot of darkness to explore, especially the war in Vietnam and its aftermath, which seared his soul.

One of the strengths of Child of Light is that his biographer, Madison Smartt Bell, was a longtime friend of Stone’s. A novelist knows from the inside what it takes to start a novel, finish a novel, secure a publisher, publicize the work, and negotiate with editors, reviewers, critics and fans.

Bell’s friendship with Stone provides him with insights into Stone’s character, but it also makes him too close to his subject matter to see where he fits and doesn’t fit into the literary landscape. His proximity also holds him back from discriminating between Stone’s truly remarkable books, such as Dog Solders, and his mediocre work including his last, The Death of the Black Haired Girl published two years before his death in 2015, which Bell argues has much in common with the great New England novels of the 19th century.

As Bell shows again and again, Stone relied on formulas, formats and archetypal characters that show up repeatedly. Stone’s novels follow the same or similar patterns. His anti-heroes and villains are cut from much the same dark cloth.

Looking back at Stone’s career, which lasted from 1967 to 2015, he looks more and more like the last in a long line of male writers, including Hemingway and Fitzgerald who dominated the literary scene for decades before the arrival of women writers, such as Toni Morrison, Louise Erdrich and Rachel Kushner, who altered the tone and the territory of American fiction.

Madison Smartt Bell describes the many drugs, including alcohol, that Stone consumed and that consumed him, his love affairs, his flings, his philandering, and his decades-long marriage to Janice Stone, who made her husband’s career possible. At times it seems that Janice ought to have shared a byline with Robert. Not surprisingly, Bell dedicates his biography of Stone to her.

Others will write different biographies of Stone—literary biographies and cultural biographies—but Bell’s Child of Light is the definite biography for our time. It’s brutally honest and loving, too.

After reading several hundred pages, a reader can’t help but feel the awful burden that Stone carried with him nearly his whole adult life, as a boy orphan who wanted to be an insider and who tried to create families wherever he went.

Madison Smartt Bell lived with Stone and his books while he wrote this biography. His dear friend and fellow novelist might not have been the “complete maverick” he suggests he was. He spent too much time at Stanford, Yale, and Princeton to fill that role comfortably. But he was enough of a maverick to write his best books that call out now to be read and reread.