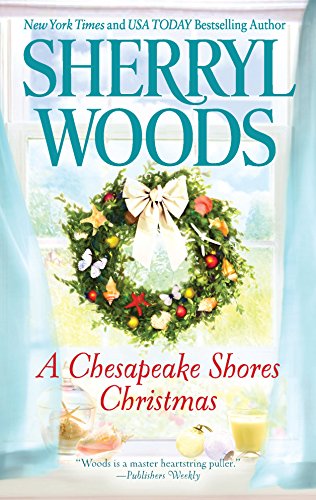 A Chesapeake Shores Christmas, book number four in Ms. Woods’s series, examines the lives of Mick and Megan O’Brien, a middle-aged couple, divorced for several years. After giving birth to five children, Megan feels stifled by Mick, a take-charge Irishman who controls her life and the lives of everyone around him. Overwhelmed, Megan leaves the tiny burg of Chesapeake Shores while her children are still young. She starts a new life in New York, where she learns the art business and works her way up to becoming a gallery manager.

Megan’s independence does not come without pain, for she misses her children desperately. Mick separates Megan from the children she loves and with his mother, Nell, keeps them in their home and raises them. Now that they are grown and on their own, Megan makes peace with all her children except her youngest son, Connor.

Returning to town often to visit them, Megan and Mick rekindle the love they once had . . . a love they never lost. When Mick proposes they remarry, Megan needs to know he has changed his ways and considers her a partner, not a possession.

Mick rents the elegant inn in town that youngest daughter, Jess, owns for their New Year’s Eve wedding. When Connor, now a high-powered divorce lawyer in nearby Baltimore demonstrates his resistance to the marriage, Megan decides she cannot remarry Mick unless all her children can give their blessings. Then on Thanksgiving Day, when a young woman dumps an infant into Megan’s arms, explaining his name is Mick and that he needs to be with his father, she decides to postpone the upcoming nuptials.

What happens to this large, boisterous, and close-knit Irish family? Can Mick and Megan remarry or will circumstances continue to keep them apart? Ms. Woods characterizes each family member showing his or her differences and similarities. She substantiates that no family goes through life without problems, but with love, they can remain reunited.

The setting of Chesapeake Shores could be any small town. Described with a homeyness and warmth, this setting has open arms to embrace the reader. Characters vividly described with all their charms and foibles endear them to the reader no matter how hardheaded or obstinate they may appear. With the exception of the overuse of many similar adjectives, and references to prior incidents from previous books in the series, which may cause some confusion, the prose is flawless and this story will touch the reader’s heart.