The Chemistry of Alchemy: From Dragon's Blood to Donkey Dung, How Chemistry Was Forged 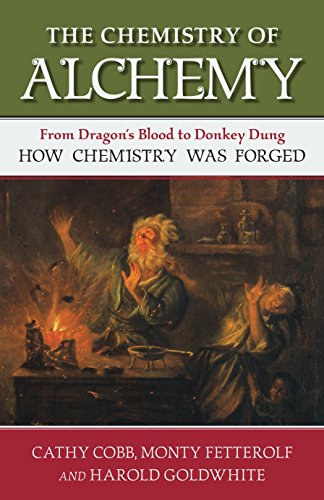 “What makes this book unique is the authors are chemists and provide experiments based on alchemy for readers to try. The experiments are simple to perform and can be made with commercially available products listed in the appendix.”

How can anyone not be fascinated by alchemy, a practice in an era when science was indistinguishable from magic and alchemical practitioners ran the risk of being called heretics and burned at the stake? The Chemistry of Alchemy was written for non-chemists by authors who are instructors and professors of chemistry. The Chemistry of Alchemy is lighthearted, its authors providing historical context along with touches of humor.

Alchemists believed that if defects could be removed from a material by purification there was a possibility of transmutation into the most pure element of all: gold. The alchemist’s “philosopher’s stone” wasn’t a stone but a concept, something capable of curing metals of their imperfections (whereby transmutation could be performed). And despite alchemists’ best efforts to make gold, science sometimes happened.

What did alchemists do for a living when gold didn’t pan out? Alchemists learned how to distill, precipitate, sublimate, and separate. They made alcohols, acids, alkalis, medicines, practiced metallurgy, made pottery glazes, dyes, perfumes, explosives, and fertilizers. Through the centuries alchemists exhibited increasing sophistication, with greater rigor in recording steps, and greater honesty in recording results.

What makes this book unique is the authors are chemists and provide experiments based on alchemy for readers to try. The experiments are simple to perform and can be made with commercially available products listed in the appendix. In the book’s Apologia, the authors “state for the record” that their “recipes” avoid poisons (e.g. mercury and lead) and bodily fluids. A few of the experiments are what one would find at a school science fair, for example combining baking soda with vinegar; however, others are arguably more hazardous and should only be attempted under adult supervision. The authors do emphasize safety first and caution the reader not to get creative, to have a fire extinguisher nearby, and be ready to call 911.

In one experiment a stainless steel frying pan is heated to melt tin (450 degrees), other experiments are intended to be done outdoors on a hibachi grill. Other experiments use strong acids, for example dissolving gold by aqua regia. In another experiment, the reader is cautioned, “It is always a bad idea to heat an air-tight container. That is called a bomb.” This reviewer appreciates the forthrightness of the warning but not so much the flippancy.

As for the narrative, the authors provide a consistent modus operandi: For each chapter, the authors select a historical era, provide historical context, identify alchemists, provide short biographies, and detail experiments.

Part one of The Chemistry of Alchemy picks two alchemists to start, Zosimos of Panopolis and Jabir ibn Hayyan. Zosimos of Panopolis lived circa 300 CE in Alexandria Egypt. Zosimos learned how to fake gold by plating material with copper. Zosimos knew that copper plate wasn’t gold but believed if he tried hard enough he could apply the same principles to make real gold. Jabir ibn Hayyan lived between the late 700s and early 800s CE, was also from Persia and also a writer of alchemical texts. Known in Western Europe as Gerber, evidence shows that many of the books attributed to him were more likely written by others long after his death.

Muhammad ibn Zakariyā Rāzī was another alchemist born in Persia. He lived around 865 CE, was a scholar, a teacher and a physician. Known in Western Europe as Rhazes, this alchemist made a systematic listing of materials, equipment, and procedures for producing a wide range of products. From his experiments, Rhazes was able to identify ammonia, acids, and borax but alas was unable to make gold.

Alchemists eventually recognized transmutation was not practical, though that did not stop them from trying. Ibn Sina, born in Persia in the 11th century and a physician known as Avicenna in Western Europe, wrote that transmutation was a waste of time.

What we know of early alchemists comes from translations of ancient texts. Before the invention of the printing press, books were written by hand. Copies were made one at a time so only valuable works were copied, and then only books that were acceptable to the Church. Friars with the intent on reconciling pre-Christian scholars with the Church translated Aristotle and other ancient works from Islamic copies of Greek texts. In the 50 years between 1200 and 1250, Aristotle’s writings went from being prohibited in the Universities of Europe to accepted and compulsory.

The reader is given the biographies of some of the more famous translators, which includes Albert the Great, Thomas Aquinas, Roger Bacon, and Michael Scot (who was condemned to Hell by Dante). Through the effort of these translators alchemical texts were made known and commented on. Alchemy was most likely not practiced by translators, or at least there is no surviving proof of this.

The 1300s was a horrible century what with plague, neverending war, and prophesies of the coming apocalypse. On the bright side, the 1300s may have been the best century in which to be an alchemist, and not just because the penalty for falsifying gold was no longer to be burnt at the stake but only to be fined the same amount of gold.

The Medieval Church was wary of alchemy and alternately condemned alchemy as heretical or promoted it, depending on who was Pope and the alchemical practice in question. In the 1300s and 1400s the Church was wealthy and its monks impoverished to the result that monks’ sects were reduced to accepting questionable practices in order to raise money, including alchemy. We know that the Dominican friars practiced alchemy because there are surviving documents condemning it.

One alchemical practice with reverberations that echo down to today was the purification of wine via distillation, which led to the discovery of alcohol, called aqua vitae. Distilled alcohol was considered both a gift from God and the go-to medicine for awaiting the end of times. And this reviewer might add: The more things change, the more they stay the same.

Modern chemistry has two historical roots in alchemy, the first from alchemists who explored the possible (and needed a wealthy patron for support), and the second from artisans who practiced and wrote practical how-to books (whose successes paid for further experiments). The split between the two became greater after 1450 with the invention of the printing press. Prior to the printing press, books had to be sponsored by wealthy patrons such as the Church. After the printing press, publication became much less costly.

“Proof by authority” was accepted reasoning for determining truth, which meant that the older the text, the greater the authority, so alchemists used names of more famous authors (which typically meant ancient, dead authors) to increase sales. Paul of Taranto, a Franciscan friar was known to publish under name of Geber, the Latinized name of Jabir. Both science and secrets sold, though in the context of the era secrets meant trade secrets. Vannoccio Biringuccio’s Pirotecnia published posthumously in 1540, addressed assaying, smelting, making alloys, fireworks, gunpowder, smithing gold, silver, iron and pewter, and alternately praised and disparaged alchemists.

How good were the medieval alchemical texts with respect to modern chemistry? The numbers of chemicals known at the time were few, and the methods of preparation required interpretation. An ingredient or a method of preparation could mean one thing to one alchemist and a different one to another. The word distillation sometimes meant distillation but sometimes meant filtration, and citrinating meant reddening or imparting the color of gold.

The texts mention mercury and sulfur but mercury meant any metal-like liquid, and sulfur wasn’t the element sulfur but a volatile combustible principal. A modern review would detect an absence of standard nomenclature, though as the authors point out, “in fact they didn’t have the word ‘nomenclature’ until the 1600s.”

At a minimum to use an alchemical text, a reader would need to know both Latin and the basic operations of alchemy but even so, a text could contain translation errors, copy errors, and intentional deceptions. The problem was that everything about alchemy required a measure of interpretation despite the early texts having an absence of hidden keys, anagrams and encryptions that became part of later alchemical texts. The authors of alchemical texts did leave themselves an out for failed experiments. Since there were accurate tests for gold and silver, if a transformation did not test well, a book could simply claim the fault to be the practitioner’s ability and not the recipe.

The driver of chemistry as something different from alchemy came from medical doctors in the Universities of Europe. Alchemy by doctors was called chymia and practiced by chymists, and was the beginning of modern physical chemistry. Medical theory despite distancing themselves from alchemy was still poor and the medicine of the Middle Ages switched from one awful approach to another, from Galenic theory to Paracelsian theory and back again—both theories were poor in respect to patient outcomes, one theory often confused for the other.

The non-medical practice of alchemy still needed protection from the fear of non-Christian practices. For example, in the 1500s mathematics using Arabic numerals was considered “conjuring,” Arabic mathematics texts in England were burned, and where burning of books is concerned, the burning of witches is sure to follow. Alchemists avoided censure by distancing themselves from witchcraft by becoming more Christianized and spiritual.

With the introduction of Theophrastus Philipus Aureolis Bombastus von Hohenheim also called Paracelsus, the reader meets a fascinating, fully formed alchemist deserving of a book of his own, not just a chapter. With Paracelsus this reviewer stops taking notes though two more curious facts will be passed along. The first, President Herbert Hoover before he was president translated the alchemical text De Re Metallica by Georgius Agricola.

And second, the Rosicrucians, an alchemical secret society that made an appearance in Dan Brown’s The Da Vinci Code, was a made-up society. An anti-alchemist satirical pamphlet was published that criticized a fictional society called the Rosicrucians. The pamphlet was taken for true by humor-impaired individuals who then wrote pro-alchemist pamphlets to defend the society. This in turn led to the “for real” creation of the Rosicrucians. How about that?

The Chemistry of Alchemy is written for non-chemists and provides historical context with generous touches of humor. The reader should be cautioned that some of the experiments provided are dangerous and require adult supervision, prompting the publisher’s publicity department to assure us that the book is intended to be shelved and sold with other adult books.