The Chemical Choir: A History of Alchemy 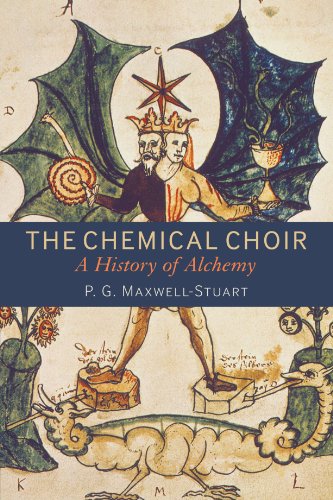 "The trouble with the world is not that people know too little, it’s that they know so many things that just aren’t so.” —Mark Twain

What did science look like before it became Science with a capital “S”? Alchemy, perhaps.

Alchemy is a seductive combination of wishful thinking, imagination, and confusion of cause and effect. Alchemists believe that metals grew in the ground like plants and grow into more perfect form with time. To an alchemist the natural act of transmutation, the change of baser metals into gold might be improved on, sped up a bit, with the right kind of help. Gold was considered so perfect that alchemists believe that it belonged to a superior realm of existence.

The Chemical Choir addresses alchemy throughout history and around the world. The book provides fragments of poems and quotes from second century BCE, and the second and ninth century ACE from China, India, Roman Egypt, the Islamic world, and Medieval Europe, to modern times and places.

The Chemical Choir is not so much a scientist-historian’s view of alchemy as it is a sociologist-historian’s view, the reader glimpsing history through a sampling of surviving ancient and medieval texts containing folklore, poetry, fantasy, and religious illustration.

The Chemical Choir is not what one would consider a history-of. It’s closer to a story-of. The story does hold together, ordered by geography and in time. But within each, P. G. Maxwell-Stuart’s depiction of alchemy is provided in a stream of consciousness form. He is a believer in and defender of alchemy. Though he does express humor—in skepticism of non-believers and evidence of fraud. On the whole, The Chemical Choir is entertaining yet maddening—What does the author truly believe?

There is also uncertainty in authorship—one author was purported to have written books discovered hundreds of years apart.

And there is uncertainty in interpretation of translation, whether characters mentioned in texts really existed, that events really occurred, whether a document is of believed true events or of storytelling (like the lost city of Atlantis or King Arthur)

There is also a question as to whether the roots of alchemy began in China or India—though the Chinese texts are older and etymologically the source of the word alchemy is Chinese, chim, meaning transforming into gold. The Greek word for this is khemia. In Arabic’s adopted Latin khemia becomes alchimia; when translated back to English this becomes alchemy.

The earliest texts were contradictory, unsystematic, irrational—not separable from magic. Magic in the ancient world was not fakery or entertainment but a belief in a connection to another dimension, a spirit world that could give mortal humans powers: powers of generating gold, of immortality, flight, and invisibility.

Why not an elixir to prolong life? Of course, there might be unexpected problems. Some of the materials alchemists used were poisonous. One of these, realgar is arsenic sulfide (arsenic = rat-poison). Cinnabar is an ore containing mercury (quite deadly, too). Elixirs were often fatal.

Other ingredients believed to hold alchemical powers were magnetite (ooh, magnetism!), malachite (ooh, green!), and arsenolite (arsenic—again?). Some alchemists would rather play with poop or mix other bodily fluids into their elixirs: feces, urine, semen, and menstrual blood.

The “golden” age of alchemy in China was between 400 and 800 ACE, alchemical prowess included astrology, ritual magic, preternatural (spirit) assistance, and making oneself “fit” in mind and body for the practice of alchemy. To some, alchemy was not the imitation of nature, but a metaphor for changes in the soul of the alchemist.
Preparation of the soul of included purification by diet and fasting, and a strong belief in alchemy, necessary for it to work (If you died after drinking an elixir, you didn’t believe hard enough). After the golden age, Chinese texts tended more toward compilations of texts than original thought. There was also a trend away from relative clarity toward greater obscurity, from chemical to psychological techniques and a quest for spiritual perfection.

India and China borrowed each other’s alchemical knowledge. The Sanskrit word for alchemy is Rayasana, “the way of mercury,” and is concerned with turning base metals into gold, refining and purifying nature as immortality is the refining and purifying the human soul into a more spiritual form. Tantric Buddhism of the fourth century ACE was believed to be a practical way to attain supernatural powers including invisibility and flying. And of course, any alchemist worth his rayasana had a female assistant to help in exploring sexual interpretations of the cosmic forces.

If transmutation didn’t work out, alchemical gold didn’t have to be real gold. The alchemical process for gilding a base metal like copper and passing it off as gold would do just as well. Dr. P. G. Maxwell-Stuart defends this practice; it might not be entirely fakery he says, there could certainly have been a market for costume jewelry. A reader will see his defense of alchemical fraud and trickery throughout, that there were two kinds of alchemists, honorable alchemists who used alchemy for good, and dishonorable alchemists who used it for personal gain.

In Roman-Egyptian times alchemy moved away from elixirs for immortality towards the study of the elemental properties of materials. The culture of Egypt under Rome was Greek, and their theory of properties began with Plato’s four elements, Earth, Air, Fire, and Water and Aristotle’s scientific inquiry reaching such conclusions as heavier objects fell faster.

With the fall of the Roman Empire came the rise of the Muslim empire. The center of alchemic learning moved from Egypt to Syria. Arabic alchemy began with many Greek borrowings and failed translations. The mistranslated name of the famous alchemist Hermes Trismegistus (three times great) in Arabic became three people, and Hermes was then believed to have been three people. Hermes was so famous that Hermetic is a synonym for alchemy. Hermes is also a cultural translation from the Egyptian—Hermes is the Greek name for the ibis headed Egyptian god Thoth.

Muslim alchemy came into its own with Jabir ibn Hayyan or Gerber (Jabir Latinized). Gerber has been called the father of chemistry. (See the nyjb review of The House of Wisdom by Jim al-Khalili). Dr. Maxwell-Stuart considers that Gerber, given the contradictory texts might not have actually existed. Nevertheless he was legendary. His alchemical leanings tended toward numerology, “magic” squares, and the creation of amulets and talismans. More scientifically he documented the chemical procedures for crystallization, distillation, evaporation, and the creation of acids, dyes, and medicines.

Toward the 1100s Muslim alchemy was on the wane. Alchemical authors became more obscure, to hide secrets, or to appear more learned, or just as likely this was the best they could do. As Europe began to leave the dark ages, the European alchemical texts were at first Latin translations of Arabic texts (that were translations of Greek texts).

European medieval texts in the 14th century tended to be more critical, calling alchemists charlatans. Medieval universities refused to include alchemy in the curricula (but that did not prevent its study by students). Notables of the time who studied alchemy included Albertus Magnus (Catholic saint) and Roger Bacon (advocate of the modern scientific method).

Not until alchemists started manufacturing (presumably false) gold coins did Pope John XXII in 1317 condemn the practice. One alchemist in 1337 London was kidnapped and held, compelled to teach his art to his captors.

England in the late 15th century sheltered practicing alchemists—this generation of alchemists tended to be physicians exploring elixirs as medicines (iatrochemistry), but not totally giving up on the possibility of transmutation.

Alchemists raised interesting intellectual arguments. What is artifice and what is nature? And a theological quagmire. Are alchemists claiming God’s power or merely assisting nature (through a gift from God)?

The practice of alchemy certainly held religious and political aspects: If an alchemist working for a king could transmute base metals into gold that was a sign from God of divine favor—but consider the consequences of failure in front of the king.

Alchemy achieved its peak popularity in Europe from the late 1500s through the late 1700s. Alchemists of this era tended to wander about Europe cadging money off of wealthy patrons for experiments, creating elixirs for prolonging life, writing allegorical texts, passing off base metals as gold and silver, and (cough) trying to avoid arrest.

Some have interpreted alchemical texts as hidden political commentary or religious allegory. Martin Luther expressed his admiration for alchemy, for its allegory and sacred meaning. Pope Leo X tolerated the practice of alchemy and two books on alchemy were dedicated to him.

There is greater information in this era as there are more surviving and translated texts. Here we can learn the ingredients for amulets and talismans: toad, menstruum of young girls, crystals of white and red arsenic, unpierced pearls, coral sapphire, emerald, saffron, musk, amber, dittany root (which produces a gas that generates blue flames), and tormentil (used in dying fabric and for relieving pain). Alchemy of this era is most associated with the renaissance physician Paracelsus, who was interested in transmuting gold, making, elixirs, numerology and magic.

In the 1500s chemistry begins to properly separate from alchemy for use in medicine (iatrochemistry), though for many alchemists, alchemy was of greater value because it was not bound to reality. Robert Boyle in the late 1600s has been given credit for being the first to distinguish between alchemy and chemistry, although what he accepted for chemistry in his day we would today still consider alchemy. His separating principle was outright fraud.

Social upheaval in the early 1600s brought signs of the apocalypse and new religious sects. The Rosicrucian’s founders were spiritual alchemists who denounced the practice of alchemy for material gain. For the Rosicrucians, red elixir represented the blood of Christ, and Christ himself was the philosopher’s stone.

Alchemy continued to prosper through the 18th century, often called “The Age of Reason.” The author claims it would have been more fitting to call this period “The Age of Theatricality.” This period includes the charlatan Comte de St. Germain, the occultist Cagliostro, and one member of the Royal Society who came to a very tragic end: James Price committed suicide after exposure for fraud.

The author shares with us a dark secret of science: some early creditable scientists who were also alchemists and astrologers include Tycho Brahe (who eventually killed himself by drinking mercury based elixirs) and Sir Isaac Newton. Science’s success in the 19th century ultimately marginalized alchemy—which by this time splintered into a many directions including the occult and esoteric “truths,” magic, mesmerism, spiritual evolution, Christian Science, and what the author calls “higher blather.”

Though it naturally comes to the forefront of a reader’s mind Dr. Maxwell-Stuart does not provide much context for the term magic, nor mention witchcraft, nor point out differences between the pagan spirit world and the Christian spirit world. The author might be perceived as being intentionally unhelpful in this respect.

Overall this reviewer found The Chemical Choir entertaining and enlightening though raising more questions than answers, and not very helpful in separating roots of science from modern Science. The truth may be out there; it’s just not in this book.