The Book of Cheese: The Essential Guide to Discovering Cheeses You'll Love 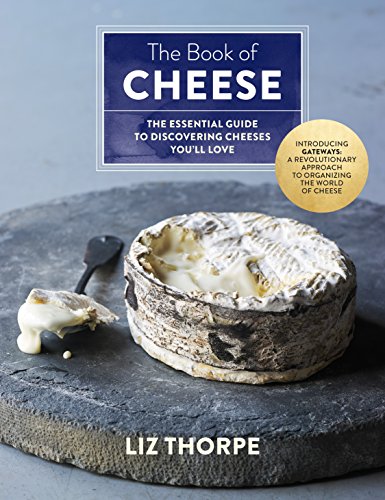 In France, children are taught about cheese in school. Every day they are served different cheeses at lunchtime, developing both their palate and understanding of cheese styles. By the time they are adults, walking into a cheese shop and choosing a few different cheeses to be consumed during the week is second nature.

We Americans, on the other hand, are more likely to have been raised on American or Swiss or that perfectly gooey melting cheese, Velveeta. As adults, we are left standing blinking and dumbstruck before a well-stocked cheese counter, fearful and unsure which cheeses to choose. As a wave of uncertainty washes over us, we tend to grab for something, anything familiar like Brie or cheddar or a fresh log of goat cheese and hurriedly make our exit.

Enter Liz Thorpe, a cheese enthusiast like the rest of us, who has decoded the world of cheese by using those familiar default cheeses as her key. She calls them “gateway cheeses” and they are all recognizable to even the casual cheese eater which makes her new book, The Book of Cheese, one of the most user-friendly single subject food books to come along in some time.

It is also loads of fun to use and the results, though modest in the beginning, are nearly instantaneous (for those of you who lean toward instant gratification). Spend even an hour or two with this book and suddenly you will find yourself ordering cheeses at your favorite cheese counter with complete confidence. It is nothing short of thrilling for the serious cheese enthusiast.

With visual aids like charts and graphs, beautiful photos, and clearly (and charmingly) written narrative, Thorpe has your learning preferences covered. Everything about this book is designed to be as accessible as possible so that even the most novice cheese eater will be able to easily understand the complex world of cheese.

Rather than organizing cheeses by country of origin, milk type (sheep, cow, goat) or technical designation (bloomy rind, washed rind, etc.), Thorpe gently invites you into the world of cheese by way of the cheeses you already know—the gateway cheeses as she calls them—that open the door to other cheeses in the same style no matter the country of origin or milk type.

This is how it works: The book is divided into ten chapters, each built around a single gateway cheese that is your way into other cheeses of similar style. She begins with the mildest and most approachable of gateway cheeses, Mozzarella and progresses all the way to blue cheeses (and then finishes with a chapter on misfits that don’t readily hue to any one style). Within each chapter, Thorpe takes you through the gambit from approachable to intense flavors. She also offers storage tips, food and wine pairing suggestions as well as tasting notes.

What are the gateway cheeses exactly? Moving from most approachable to most intense they are: Mozzarella, Brie, Havarti, Taleggio, Manchego, cheddar, Swiss, Parmesan, blue and, finally, the misfits that can’t easily be categorized.

She developed this method based on years of teaching tasting classes at New York’s famed Murray’s Cheese and crisscrossing the country promoting different cheeses in grocery stores. Thorpe often began a conversation with consumers by asking what they liked. If they replied Havarti, she would steer them one way. If they said cheddar she would steer them another.

Most importantly, Liz Thorpe comes across as utterly unpretentious. She is as enthusiastic about Havarti in its way, as she is of some unpasteurized, rind washed cheese like Vacherin Mont d’Or (which she considers the Holy Grail of cheese and is nearly impossible to source even in the Haut Doubs region of France where it is produced). She also started out as just another cheese enthusiast like the rest of us who quit her corporate career in pursuit of her passion. In other words, she speaks our language, never forgetting what it was like not to know about cheese.

As for tasting, she approaches cheese just as you would wine: look, smell, and then taste. Descriptors like wet stone, mushrooms, grassy, etc. will also be familiar to wine enthusiasts. (It is all of a piece when it comes to developing your palate.)

Sprinkled throughout the book there are a few recipes or cooking suggestions. Like how to make your own Ricotta or a plug for using Havarti in your next grilled cheese sandwich instead of cheddar, which Thorpe considers too greasy. (While I didn’t make Ricotta, I did try Havarti in a grilled cheese sandwich. Just as she promised, it was a far superior melting cheese and was, as she writes, “a flowing river of milky, sweet, tangy cheese.” Still, it was a bit too mild for my taste.)

Of course, the real fun of this book comes the first time you make a more informed selection at the cheese counter. I barely got through the first three chapters when I ran off to my local specialty grocery store, bellied up to the cheese counter, and confidently ordered small wedges of Saint-André (a buttery, cow’s milk triple cream Brie-style), Pont L’Évêque (also a Brie-style cow’s milk but with a funkier taste), and Toma (from the Havarti-style, a cow’s milk cheese from California that Thorpe calls an “everyday upgrade”). None of them was particularly adventurous, but being able to choose three cheeses, each with a different flavor profile from mildest (Saint-André) to strongest (Pont L’Évêque), was so satisfying.

After finishing the book I was ready for another cheese sortie and this time, went to a larger purveyor with more choices. I chose five cheeses, one from the Brie family (Mt. Tam), two from the Taleggio family—the stinky cheeses—(Quadrello Di Bufala and Rollright), one from the Manchego family (Pecorino Grand Cru) and finally, one from the Parmesan family (aged, L’Amuse Gouda). It was a lovely, well-balanced cheese board, made up of cheeses I had never tried before. You see how easy this is?

Of course, The Book of Cheese will not make you a cheese expert in one reading. It is meant to be a resource as you learn more and more and begin to develop your own cheese palate. As the subtitle says, it is The Essential Guide to Discovering Cheeses You’ll Love. But before you know it, you’ll be selecting cheeses as easily as a Frenchman (or at the very least a French school-aged child).