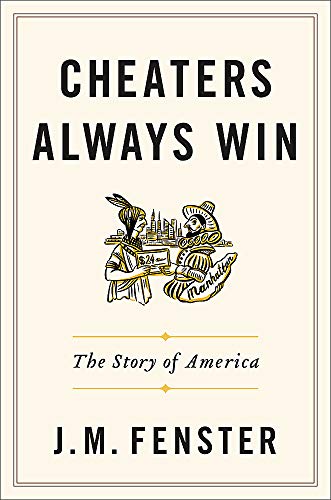 “We live in an age of horrible people who seem committed to getting ahead by cheating other people.”

J. M. Fenster has written a delightful and entertaining social history about cheating. That might sound like an impossible task, but Fenster has a sardonic and breezy touch and a vast collection of stories mostly based on truth. Her topic is both timely and terribly depressing. We live in an age of horrible people who seem committed to getting ahead by cheating other people.

Fenster focuses not only on cheaters but also on those who are cheated. Because cheating is so ubiquitous, all of us are cheated and don’t ever know it. We thoroughly enjoyed the quiz shows of the 1950s even though the contestants were supplied the answers. More than a quarter of all people admit they have cheated on a school test. Taxpayers owe $131 billion to the US government in unpaid taxes. Modern society has become so complicated that the rules are unknowable.

There are some people who don’t cheat and pursue a life filled with integrity. Although many, perhaps most, parents teach their children that it is wrong to lie, cheat, and steal, the lessons are not learned when cheating is so easy. We justify our actions based on the assumption that “everyone does it.”

It is not hard to find public men and women who model bad conduct. Sometimes they are caught by official defenders of the rules, such as police. Other times they are brought to justice by persons who have been cheated through the instruments of the law. Every breach of contract action involves a cheater and someone who claims he or she was cheated.

Fenster often returns to the most common usage of the term “cheater.” It refers to a spouse who fails to meet expectations of fidelity. Normally, such misconduct is scorned even though it is quite common. Half of all marriages end in divorce even if cheating is not involved.

Fenster repeatedly focuses on cheating in sports, a front-page event these days. Players have cheated in baseball for 150 years. In fact, it is part of the game to “steal” second base. Recently, some clubs have been accused of adopting high technology to steal signs from a catcher. Using performance-enhancing drugs has been banned in the game, but that does not mean it has been stopped.

Fenster does not suggest ways to stop cheating whether in sports or in marriage. If “everyone cheats,” that may be impossible. It would require universal morality transplants. The only way society can keep its members from cheating is to create rules of behavior and enforce them. We do that every day with some success.

How do you keep wealthy people from cheating on behalf of their offspring to gain entrance into preferred colleges? You shame them in the media and then punish them. It is unlikely this particular form of cheating will reappear soon. How do you keep retailers from selling shoddy goods at inflated prices? You punish those that are caught and make sure the miscreants lose their status in the marketplace.

Fenster could write a whole treatise focusing only on Donald Trump. He has tasted every version of cheating whether marital, business, or in politics. He even cheats when playing golf. He probably even cheats at solitaire. His misdeeds are often caught, but without much censure to follow. He has been impeached by the House of Representative because he used government funds to cheat on the 2020 presidential election. This con man continues in office because he instills fear in anyone who would stand up and publicly condemn his misdeeds. The king has no clothes, and maybe we deserve him.