Chasing the North Star: A Novel 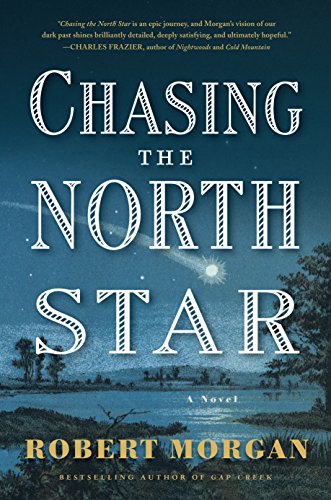 Chasing the North Star by Robert Morgan is the gripping and convincing story of a bright and courageous slave in the American South during the 1850s who runs away seeking freedom. Richly imaginative and thoroughly well researched, Chasing the North Star walks the reader through an extensive and thrilling escape filled with fiery insight and deep personal conviction.

Jonah is a teenaged slave who escapes his plantation after a severe lashing for reading a book which his master thought was stolen. He decides to run away to Canada, where he can live free.

Not long after the escape, Jonah encounters Angel, who is somewhat older and attractive and who is also committed to running to freedom. She falls in love with Jonah, having a better understanding of his personality than does Jonah himself. Together they fight the elements, climb mountains, and repeatedly escape from the law and whites who seek the bounty for their return.

Although Jonah initially attempts to leave Angel behind, she repeatedly appears. They manage the unimaginable, overcoming immense adversity with their intelligence, determination, and providence. Angel’s first-person chronicle is imparted within Jonah’s journey, chapter by chapter, providing an alternate perspective that builds upon the depth of the plot.

Jonah escapes from his South Carolina plantation with only a memorized map and the north star to guide his way. An intelligent plantation house worker, Jonah learned how to read and write by observing his master’s children as they were tutored. Without the ability to read, such an escape would have been impossible.

Aiding a runaway slave is a serious crime. Turning in a runaway slave provides a handsome reward. Jonah and Angel know they are on their own and can trust no one. Hiding during the day and running all night, they face the elements, including severe storms, floods, and eventually, snow. All the while, they have to flee whites who hate them. Repeatedly, they are caught and escape.

Morgan summons a narrative that clearly describes the people, culture, and emotions of the time, especially in antebellum North Carolina and later in New York. His personal connection to the land, including its history and features, enables the reader to experience the thrilling escape vividly. His historical nuances and references are spot-on.

Chasing the North Star is an epic journey, vividly detailed, acutely satisfying, and ultimately hopeful. It sheds light upon some of the darkest moments in American history; yet it also illuminates the charity and love expressed by whites who hid, fed and aided the runaways at the risk of their own lives and those of their families.