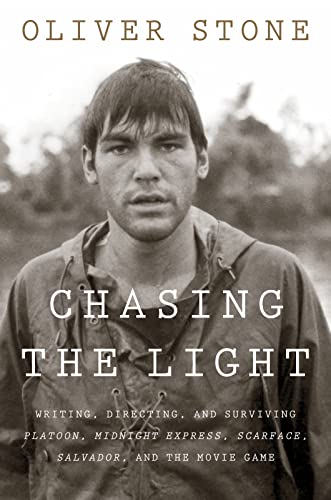 Start Oliver Stone’s extravagant autobiography by reading the “contents” that lists ten chapters, including “Downfall,” “Waiting for the Miracle,” “South of the Border” and “Top of the World.”

Or else glance at the extensive index that runs to ten densely packed pages. Under the letter “F,” for example, there’s the FBI, Fellini, film critics, First World War, Flashdance, Fonda, Ford, Foster, France, Full Metal Jacket, and much more.

In Chasing the Light, Stone roams all over the place, toots his own horn, wallows in self-pity, and explores what he calls “the Movie Game,” not the movie industry.

The image of “chasing the light” runs through the book and helps to provide continuity. “Chasing the Light. It seems all my life I’ve been doing just that,” Stone writes near the start of his book. It’s what movie directors and adventurers do.

The novelist Jack London created a character called “Burning Daylight” who does what Stone has done most of his life. Neither burns out or burns up.

Life itself seems to be a big game for the director, producer, and writer who has made towering movies that have turned him into a world-famous figure.

No doubt about it, Stone knows how to make blockbuster movies that provoke audiences, enrage critics, and win awards. He also knows how to make big bold books, including The Untold History of the United States, which he co-wrote with Peter Kuznick, a professor at American University.

Chasing the Light is his biggest, boldest book yet.

Then, too, Stone knows what it means to make war.

He did that in Vietnam in 1967 and 1968, was twice wounded and received a Bronze Star for heroism.

No matter what he makes, Stone is always in your face, whether “you” are the moviegoer, the reader, or the observer watching his wild antics in the mass media that has helped to make him the celebrity he is today.

The American disease, in his view, is “exaggeration.” If so, then he’s as infected by it as anyone else. The words “exaggeration” and “exaggerate” appear again and again in this autobiography. Stone constantly exaggerates. “Who doesn’t exaggerate their own importance,” he asks rhetorically.

Stone begins his autobiography in his own childhood. He describes his parents—French mother, Jewish father—follows his own education, describes two of his three marriages, and traces his evolution in and around and outside the Hollywood studio system.

Chasing the Light doesn’t end in the present day, though it comes close to it. Indeed, there might be a sequel to this book. It might be called Son of the Light. Or Light Part II.

Stone loves sequels. He has made several of them.

Not surprisingly, Vietnam is at the heart of this book.

The war that the U.S. fought in Vietnam, which the Vietnamese call “The American War,” is the historical event that shaped Stone’s identity, and his world outlook and provided him with the raw material for Platoon, his 1986 movie that boasts a stunning cast of both Black and white actors that includes Charlie Sheen, Tom Berenger, Willem Dafoe, Forest Whitaker, Corey Glover and Johnny Depp.

Stone takes readers behind the scenes, shows how and why Platoon was made and how it almost never did make it to the big screen. The author also traces the making of Midnight Express and Salvador, two movies that were as controversial in their right way as Platoon.

In a succinct and powerful blurb for Chasing the Light, the highly esteemed British actor, Sir Anthony Hopkins, nails it when he writes that Stone is “a giant provocateur,” that he “rattles cages,” “pricks the bubbles of the namby-pambies,” and “provokes outrage.”

Namby-pambies might not want to read Stone’s autobiography. Those who don’t want their cages rattled might also aim to avoid it. But troublemakers might find Chasing the Light precisely the kind of book that will energize, embolden, and arm their spirit.

Stone is big enough and self-confident enough to include the comments of his severest critics, including The New Yorker’s Pauline Kael who noted that he was both hard-boiled and sentimental, a mix of right-wing and and left-wing, and an outsider from the film industry who has “got all this Hollywood muck in his soul.”

Stone has poured his own oversized contradictions into his autobiography. On the one hand, he wants to rock the boat and shake his fists at the studios, and on the other hands he wants, as he himself recognizes, “money, fame, glory and honor.” He has not merely survived but succeeded beyond his own dreams.

Surprisingly, he admits that he voted for Ronald Reagan for president in 1980, though he doesn't explain why. More recently he has helped to bolster the image of Vladimir Putin in a four-hour documentary of the Russian President, who says on camera that he doesn’t have a bad day because he is “not a woman.”

When he describes the actual creative process he can be exceedingly helpful, as for example when he explains that writing is a “solo” activity when the author is in his or her own head, that “editing” is a “form of rewriting,” and that when the filmmaker directs he or she extemporizes, shares an inner private experience and acts “it out.”

What’s also fascinating is that Stone can’t and doesn’t describe reality or what approximates it without recourse to books and movies. He filters experience through the media.

His French mother is Scarlet O’Hara. Stone casts himself is Fred C. Dobbs, the Bogart character in the John Huston classic, The Treasure of the Sierra Madre. He also describes himself as Ishamel in Melville’s epic Moby-Dick and a samurai warrior in a film by the Japanese director, Akira Kurosawa.

Stone offers a quotation from a letter that Jackie Kennedy wrote to him after she saw Platoon and explained that “Your film has changed the direction of a country’s thinking. It will always stand there as a land-mark—like Rachel Carson’s Silent Spring, like Thomas Paine’s Common Sense.”

One might not agree with Jackie Kennedy’s assessment, but such is the power of Stone’s autobiography that one gives her words serious consideration.

Maybe Oliver Stone is a genuine American shapeshifter and not merely an enfant terrible. Maybe he’s a fiery cinematic pamphleteer who has helped to expose and ridicule “neoliberalism” as the worship of empire, military might, the rule of Wall Street and the antithesis of true liberalism.

Make no mistake about it, as Chasing the Light shows, Stone is no liberal.