Chasing the Cyclone: A Father's Unending Love for His Son 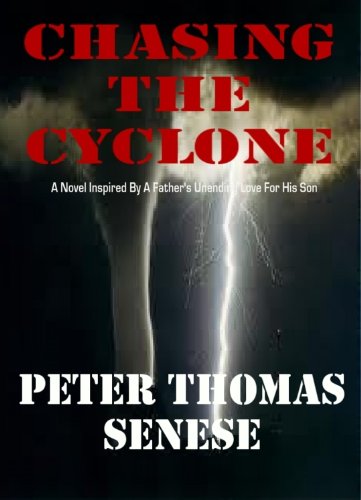 “Cyclone is based on a true story—the author’s. . . . The protagonist, Paul Francesco, orchestrates a master plan that he hopes will reunite him with the love of his life—his son Alex. Along the way he finds himself swamped in red tape and drenched in frustration. Filled with a plethora of powerful characters and puzzling predicaments and dead ends, the story moves quickly.”

Chasing the Cyclone is a well-written thriller spanning three continents. In Cyclone, Paul Francesco, the protagonist, discovers that his seven-year-old son, Alex, has been abducted by his ex-wife. Mother and son then flee to Canada where she is a citizen.

The challenge to locate his son takes many surprising twists and turns as the search becomes increasingly complex. Mr. Senese shares myriad emotions by writing in the first-person point of view as he weaves through the action in this suspense-filled story. He illustrates for the reader the despair and fear that infects every minute of every day when a parent is searching for his or her child.

Cyclone is based on a true story—the author’s. Thus, the reader enjoys a front row seat as the complex journey unfolds. This novel might also be considered a treatise on international child abduction, as Mr. Senese experiences one roadblock after another in attempting to work with the authorities in different countries.

By recalling his own difficulties in dealing with multiple jurisdictions, Mr. Senese offers practical solutions to ameliorate many of these hurdles; however, frustration is a quite evident in this story as time after time the courts refuse to act quickly and decisively.

One element that becomes readily apparent is the disadvantage of the “chasing parent,” the parent left behind. Legal and other ancillary costs, i.e., private investigators and travel expenses, can quickly bring the search for an abducted child to a halt when finances run dry. In a sense, the parent who takes the child to another country hopes for that outcome.

Another complicated component in international child abduction is the inability of countries to work with each other when trying to help the chasing parent locate their abducted child. To alleviate this problem, the Hague Convention was created in December of 1983; unfortunately not all countries are signatories.

Cyclone, while full of actual strategies and resources to assist parents in international abductions, is above all else a love story about a father and a son. Paul Francesco and his son Alex share a special bond enabling them to endure the sad, despair-filled years they spend apart. On the few occasions they were able to talk or see each other, their love was palpable and energized them to endure the next set of hurdles they faced.

From Los Angeles, to Canada, to New Zealand, and, eventually, Macau, a special administrative region of China, Cyclone is rife with international intrigue and suspense. The protagonist, Paul Francesco, orchestrates a master plan that he hopes will reunite him with the love of his life—his son Alex. Along the way he finds himself swamped in red tape and drenched in frustration. Filled with a plethora of powerful characters and puzzling predicaments and dead ends, the story moves quickly.

Cyclone will leave you informed and satisfied. Even though it is an exhausting read, you will be reluctant to put it down. As an added incentive to read his story, Mr. Senese advised that all of the profits from the sale of Chasing the Cyclone will go to the I Care Foundation whose mission is to conduct research in the area of international parental child abduction.