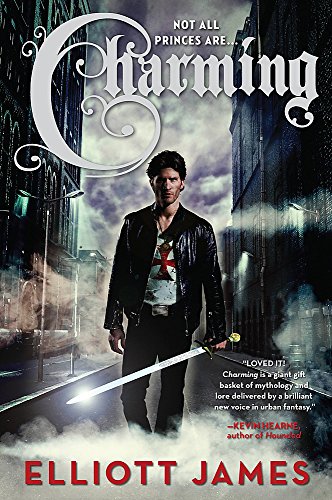 “. . . a thought provoking character study of the prince of familiar fairy tales . . .”

It could’ve been the beginning of a bad joke if it hadn’t been true.

John Charming is the werewolf. He was born that way through no fault of his own and he’s regretted every minute of it because he comes from a long line of heroes…

“. . . the Charmings were an entire family line standing between humanity and all others for generation after generation . . . that is a heavy burden but I carried my name proudly for as long as I was able . . .”

Before he was born John’s mother was attacked by a werewolf. He survived, she didn’t, and his father was killed by the pack. John was raised to be a Knight Templar, dedicating his life to fighting supernatural evil—until his teachers discovered his lupine heritage.

Now he’s again on the run from his own people—an outcast who’s never transformed but is still considered a threat—while he tries to reconcile himself to himself. And that’s when Sig the Valkyrie and her group come into his life.

There’s a vampire hive in town, taken over by someone who’s power-mad, angry about being a vampire, and hating anyone and everyone who just happens to be living. Sig wants John to help them and he reluctantly agrees. The only problem is, he—and his inner wolf—are attracted to Sig, and her psychic lover Dvornik wants to kill him.

“Why would you cover for me?” I asked Dvornik bluntly. “You don’t like me.”
He barked out a short spasm of a laugh. He seemed to be genuinely amused . . . then the amusement died and he looked at me seriously. “If I didn’t,” and at this point he nodded toward Sig, “she would leave me.”

It’s a toss-up who’s going to kill who first. John doesn’t trust the hunters and they don’t really trust him but they need each other, and it’s going to take all his knight’s training and wolf’s cunning for any of them to survive to see if there’s going to be a Happily Ever After—or even an After.

Author Elliott James has filled the narrative with plenty of myth-based explanations of the whys and hows of the various supernaturals involved, making this a well-thought–out story. Told from John’s POV, it’s filled with wry and ironic humor, and it’s not overly -bloody in spite of its vampiric/lycanthrope theme.

Charming is the story of a man coming to terms with those part of himself he’s been taught to hate while using them to fight for a greater cause. As the first entry in a series, it’s a thought provoking and entertaining character study of the prince of familiar fairy tales.