The Charm Offensive: A Novel 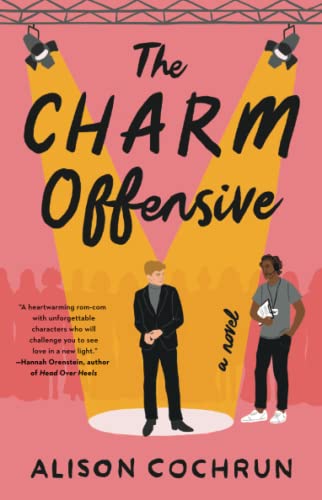 The Charm Offensive, written by Alison Cochrun, who is a high school teacher by day and novelist by night, is typical of these works. They set up a couple of characters and a situation and spin the story as long as they can. At over 350 pages, Cochrun’s romance runs out of gas long before the inevitable ending.

Twenty-eight-year-old gay Indian American, Dev Deshpande, has the job of his dreams as a junior producer on Ever After, a reality show modeled on The Bachelor. He is still recovering from the end of a six-year relationship with a fellow producer. Happy as he is in his job, Dev suffers from bouts of depression. Now he has been assigned to be the handler for Charlie Winshaw, this season’s “Prince Charming,” a Silicon Valley millionaire who needs a new image after a public professional meltdown. Charlie is stunningly handsome, but a nightmare for his producers. He’s on the autism spectrum and prone to anxiety attacks. Of course, Dev and Charlie fall in love, but how will that fit with Charlie’s starring role on a series that has to end with his choosing a bride?

Of course, Dev and Charlie misread each other’s signals. Charlie is a 28-year-old virgin who has never experienced sexual attraction or love. Dev has such a low self-image that he doesn’t trust what is happening with Charlie. Cochrun is admirable in creating sympathetic pictures of men with psychological issues that will resonate with many readers. The beauty of the relationship between Dev and Charlie is how they sympathize with and support each other’s anxieties and depression. At its best, The Charm Offensive is a story of healing through finding an understanding, empathetic partner.

Other aspects are typical of the genre. Both men have understanding, lively female best friends who help steer them together. Unfortunately, the ethnicity of the rainbow cast of characters only superficially informs their behavior or attitudes. What does it mean to be a person of color working on a very white reality show? The book satirizes the conventions of Bachelor-type television shows but those shows are so over-the-top that they are their own self-parody. The love scenes are cautiously described.

The Charm Offensive doesn’t aim to be more than light entertainment. Like a giant helping of  dessert, there is too much of a pleasant, very sweet trifle.