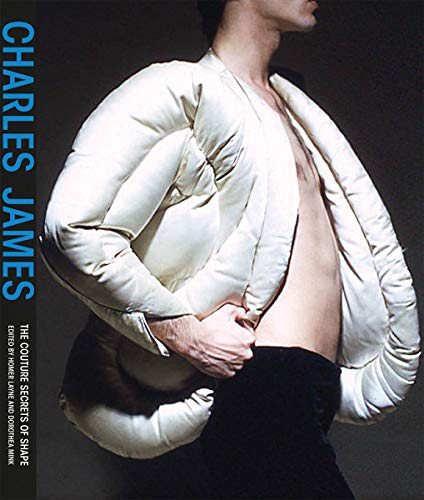 “From the onset, James shows a preference for a particular type of customer, stylistically confident and eccentric ladies, a distinctive character being more appealing to him than the ideal figure.”

There is an extreme amount of attention paid to the construction of his garments, in particular the eider down jacket that has withstood the test of time and insured James a place in fashion for all eternity. The reader will be made privy to exactly how this incredibly intelligent and obsessive man created some of fashion’s most iconic and revered dresses, coats, and gowns. Seaming and “architecture” play a major role in the development of his oeuvre, and yes, it’s all literally illustrated to learn from or to use.

“Charles James is a sculptor whose genius finds its expression in fabric.”

James’ story is told first hand by those who outlived many of his inner circle, the ones who labored and put up with his many foibles and, well, craziness that encircled his life. Of particular interest is the “voice” of Homer Layne who was not only a student of James but also his assistant in that one room in the Chelsea Hotel. Much of that is passed on here is first hand.

“When Charles James himself once explained his five creative decades, he expressed it as such: If I were known for only two things, it would be the celebrated displacement of the dart and the wall of air between the body and the fabric.”

The book also serves as a sort of instructional manual; the readers are shown the techniques and methods of how James designed and conceived his fashion including his inventive changeable more universal mannequin whose measurements and proportions could be changed. This segment of the book is lavishly illustrated with drawings by Antonio Lopez as well as actual photographs taken in James’ workroom. Admittedly, much of the text in this segment is technical, yet it is highly illuminating in understanding just how obsessive and compulsive James was when it came to his creations.

For any fashion maniac or dedicated follower of Charles James, this book is a must. Keep in mind the book is chock a block with Antonio Lopez’s illustrations as well as a multitude of photos of James himself and his inner circle.

As a post script, what seems so odd and out of context is that Rick Owens was chosen to write the preface given his body of work, despite his statement that “at the beginning of my label in the mid-nineties, my ultimate goal was to be Charles James.” Well, you could have fooled me, Mr. Owens.