Chaos Under Heaven: Trump, Xi, and the Battle for the Twenty-First Century 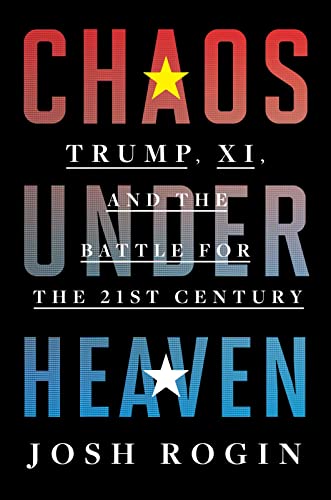 To understand the challenges posed by Communist China, and the difficulties experienced by the United States in dealing with these challenges, there is probably no better book than Chaos Under Heaven. Author Josh Rogin, a reporter and opinion columnist for the Washington Post, knows many of the relevant actors in the U.S. capital, New York, and beyond.  He combines his analysis of who did and said what with investigations of their personal and institutional interests.

Rogin underscores a fundamental difference in the ways that Chinese and U.S. leaders approach foreign policy. China’s leaders have a long time horizon in which they seek to shape Asia and the world. Now, more than ever, they appear united as they exploit every tool to advance their goals and undermine outside resistance.

The United States, by contrast, is profoundly divided—not just in Washington but in public attitudes and vested interests across the land. Elite opinion is split between those seeking to engage China and others who favor confrontation. Many in an older generation of China scholars appeal for deeper understanding of China and more engagement. A younger, more skeptical generation doubts that China will change its policies at home or abroad unless compelled to do so by adroit use of soft and hard power by the United States and its partners.

Many policy dilemmas are rooted in conflicting interests. Companies like Boeing and General Electric felt pressured by Beijing to gradually transfer technological know-how to China. To do so could risk U.S. military and economic prowess in the future; not to capitulate could keep Boeing and GE from accessing the huge Chinese market. GE executives had to balance America’s strategic interests against next year’s profit-and-loss statements plus the value of their own stocks.  When former executives at Boeing or Raytheon took positions at the Pentagon, national versus personal interests were at stake, because many of these people planned to return to the highly paid jobs they left behind.

Similar tensions existed before the Donald Trump presidency, but they grew more profound under a leader who knew little and cared less about anything except his own political and commercial ambitions. Any would-be influencer who seemed able to advance Trump’s ambitions and got his attention (perhaps by a Fox News interview) could tilt U.S. policy toward a hard or soft line vis-à-vis China.

Rogin gives the names and particulars of many individuals who influenced Trump. His Secretary of Transportation, Elaine Chow, stands out. Wife of Kentucky’s Republican Senate leader Mitch McConnell since 1993, she was born in Taiwan in 1953 and moved to the United States at age eight. Educated at Mount Holyoke College and the Harvard Business School, she worked for several financial institutions before being appointed to senior positions in the Department of Transportation under Presidents Ronald Reagan and George H. W. Bush and then head of the department under President Trump. She is accused of corruption in funneling highway contracts to firms in her husband’s Kentucky and for bolstering the Foremost Group, co-founded by her father and now led by her sister,  a huge enterprise that builds most of China’s commercial ships, while managing to cut subsidies for U.S. ship builders.

Meanwhile Foremost accepted at least $300 million in loans from the state-owned China Export-Import Bank. Rogin notes also that Chao and her husband took between $5 and $25 million from her father as gifts. The Chao family also donated over a million dollars to McConnell’s Senate campaigns.

Many of the Americans described by Rogin helped China to penetrate the U.S. university and research institutions, stock listings, economic life, and public opinion. China’s global networks of “Confucius Institutes” teach not only Mandarin but also cultivate empathy for Beijing’s stance on Taiwan and other issues.

An investigation led by Robert Lighthizer, U.S. Trade Representative from 2017 to 2021, reported in March 2018 that Chinese illicit practices—theft of intellectual property, forced technology transfers, and unfair subsidies—were robbing the U.S. economy of at least $50 billion annually.

Rogin is good at telling both sides of many issues, but he exaggerates when claiming that 100 million Americans own stocks, many of which can gain or lose money in China. As reported in Forbes, August 21, 2020, New York University professor Edward Wolff  “finds that even though almost half of all households owned shares either directly or indirectly, the richest 10 percent of households controlled 84 percent of the total value of these stocks in 2016.”

Only the largest players, such as Blackrock Group and its CEO Stephen Schwartzman, would gain or lose significantly from U.S. business ties with China. Schwartzman funds an education center at China’s leading university aimed at enlightening both U.S. and Chinese students,  but he also has a deep interest in sustaining Sino-U.S. commerce.

Rogin’s chapter on Cold War Redux applies his knowledge of U.S. foreign policy since 1945 to the question of whether a new cold war is unfolding. He shows how George F. Kennan’s arguments in 1946–1948  for containing Soviet expansion mainly by political and economic means became distorted by 1950 into heavy reliance on military assets. A similar dichotomy faces U.S. policymakers now as they debate how to confront an expansive and repressive Chinese dictatorship.

Rogin notes the influence on U.S. policies of many Harvard University graduates and professors. He errs, however, in claiming that diplomat-scholar Kennan had a Ph.D. from Harvard. Kennan joined the U.S. Foreign Service immediately after graduating from Princeton in 1925. Anticipating the establishment of diplomatic relations with the USSR, the State Department sent Kennan to the University of Berlin in 1929–1931 to study Russian thought, language, and culture. He then accompanied the first U.S. ambassador to the Soviet Union in 1933. On the other hand, Rogin may underplay the roles played by Harvard professor Graham Allison in shaping U.S. views on China and by former Harvard researcher Kurt Campbell,  now the Indo-Pacific coordinator on President Joe  Biden’s National Security Council.

Chaos Under Heaven emphasizes chaos in the United States. It could do more to detail chaos in China. On balance, it is a fascinating and illuminating account of the hard choices facing policymakers in both countries.