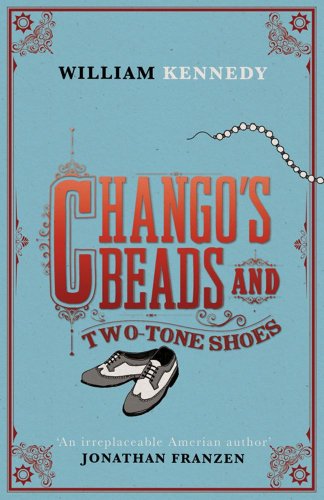 “The writing in Changó’s Beads and Two-Tone Shoes is sharp and original throughout most of the book, with skillful intercuttings of first- and third- person viewpoints.”

“George Quinn walked The Gut door-to-door, picking up the play, paying off winners, and when there was no school, Daniel made the rounds with him—the Turk’s grocery store, with a one-arm bandit on the counter, the Double-Dutch tavern where girls worked the bar day and night, the soap factory, the Albany Water Works, Big Jimmy’s night club, the old Times Union where the journalism bug bit Daniel.”

Ah, that’s the William Kennedy we know and love, the Pulitzer Prize-winning novelist; the bard of mid-20th century Albany, New York; the ex-newspaperman who speaks the language of the drunks, the bartenders, the down-and-outs, the working stiffs, the political hacks, the Irish, and all the other little guys.

In Changó’s Beads and Two-Tone Shoes, he visits his trademarked native city on June 5, 1968, the day another famous Kennedy—Senator Robert F. Kennedy—was shot, tracking an ensemble that includes a newspaper reporter (the above-mentioned Daniel Quinn, part of the extended Phelan-Quinn clan that populates many of William Kennedy’s novels), Quinn’s radical-debutante Cuban wife Renata, her troubled niece, an activist Catholic priest, a homeless drunk, a Mafia-connected and seductive drug dealer, a terminally ill jazz pianist who played with Billie Holiday, his son who leads a black power group, and much more.

The book follows this cast through the streets and clubs of Albany for nearly 24 hours, from the pianist’s final concert to a race riot.

The writing in Changó’s Beads and Two-Tone Shoes is sharp and original throughout most of the book, with skillful intercuttings of first- and third- person viewpoints. Best of all are the many sections seen through the eyes of Quinn’s father, George, a onetime cog in the Albany machine—the one “picking up the play” in the first paragraph of this review—who is now apparently in the middle stages of dementia. Mr. Kennedy captures this voice perfectly: the bittersweet mix of courtesy, confusion, and pinpoint memory:

“Arm in arm. George Quinn arm in arm with. He looked at Vivian. With Vivian, a friend, old friend. Beauman’s we knew, other places, on the water? Al-Tro Park on the Hudson? He looked at her again. He liked her hat.”

In one set piece, Mr. Kennedy draws on his journalism career to present a wonderful “interview” of the mayor of Albany conducted by Daniel Quinn, in which both sides tacitly acknowledge the inevitable clichés of the reporter’s assignment. First, Quinn asks:

“The city is on edge, blah blah, racial tension blah, and on top of this comes the shooting of Bobby Kennedy . . . Your reaction?”

“National tragedy blah blah, might have been president blah, grieve for his family blah.”

Unfortunately, it takes 122 pages to get to all this. First, Kennedy sends Daniel Quinn to Cuba in the waning years of the Batista dictatorship. And this is not Kennedy’s turf.

In Cuba, Quinn becomes naively infatuated with Fidel Castro, his own future wife Renata, and the mystical religion santería (which includes the myth of Changó, the warrior whose bead necklace supposedly protects believers). Oh, and Quinn also mingles with Ernest Hemingway. In fact, in this section of the novel, Kennedy writes like Hemingway. While Batista was certainly sadistic and authoritarian, it’s a little much to buy the image of Castro as freedom fighter, philosopher, brilliant general, and heir to the Changó myth, yet Kennedy scatters no seeds of skepticism. For that matter, he could use more skepticism about Renata.

In the end, author Kennedy brilliantly ties Cuba and Albany together, reminding us why any novel he writes is a joy. If he’s getting tired of Albany, a reader can hardly begrudge him a chance to explore new worlds. But readers can also ask him to bring his no-nonsense journalist’s sensibility and leave behind the rosy-colored glasses.