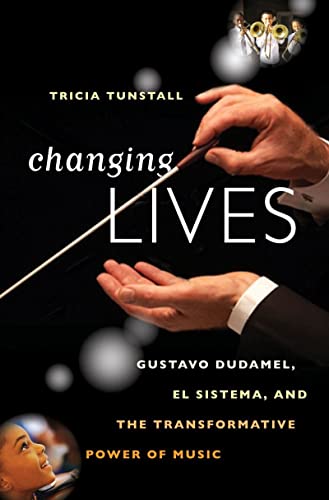 “Changing Lives gives appropriate credit where credit is due; however, it would have been more engaging had the author given us a more balanced portrayal of the system that is truly revolutionizing how music is taught to children and to the world.”

Music has power. Power to inspire, power to move, and in the case of El Sistema, the power to save.

El Sistema, for the uninitiated, is a music school spread across Venezuela, open to any and all youth who care to join. Children as young as one year old receive training in music. Some play paper instruments, some wave white gloves, but every student receives an education that, in turn, gives them an opportunity to better their lives and live above the poverty line.

Ms. Tunstall’s writing style is nice in that she really puts the reader in the middle of the story; however, after about 100 pages the book gets to be a little one-note-ish.

Every new aspect of the school the author introduces is touching and unbelievable. Time and time again we hear how amazing Maestro Abreu is and how tirelessly he works to further his Sistema, reaching thousands more children every year. The Maestro’s energy level is higher than men half his age, but how many times does Ms. Tunstall have to repeat this? Person after person comes forward with their personal testimony of how El Sistema and Maestro Abreu saved their lives by enriching them with music.

What happens to the kids that Abreu cannot help, though? How protected are the children who ride, sometimes for hours, on buses to schools in some of the more dangerous barrios? Ms. Tunstall gives us a lot of the upside of El Sistema, but glosses over the fact that Abreu cannot help everyone, and she barely mentions that some of the nucleos cannot stay open past dark because their neighborhoods are so bad.

Hugo Chavez, controversial socialist president of Venezuela since 1999, has long worked for minorities and supports El Sistema. If Ms. Tunstall were a Venezuelan writer, this book would almost feel like government propaganda. All of the teachers in the system are paid by Chavez’s government, so Abreu must have some kind of magic touch that helps him maintain the Sistema’s financial support through several different politcal regimes, while still being able to run the school in the manner best suited to the children.

Admittedly, El Sistema is a wonderful school and Maestro Abreu is amazing. The amount of success and the talent of his proteges is striking. The closest American comparison would have been Leonard Bernstein, but even he did not take his Young People’s Concerts to the extent that Abreu did.

Changing Lives gives appropriate credit where credit is due; however, it would have been more engaging had the author given us a more balanced portrayal of the system that is truly revolutionizing how music is taught to children and to the world.