This Changes Everything: Occupy Wall Street and the 99% Movement 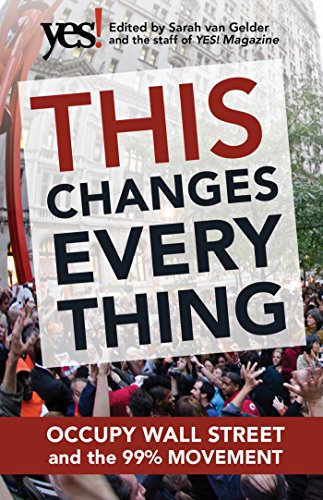 Concurrent with the release of This Changes Everything: Occupy Wall Street and the 99% Movement, mayors of 18 U.S. cities joined in a conference call to coordinate eviction of the occupiers. Will this end the movement? Or might the evictions engender more determined protests? The nondoctrinaire nature of the Occupy movement challenges answering these questions, for “no one can say where things will go from here.”

Edited by Sarah van Gelder and the YES! magazine staff, This Changes Everything collects contributions of 16 occupants, commentators, and luminaries, plus some source documents created by the Occupy movement.

Initiated in September 2011, Occupy Wall Street is one of 1,500 global gatherings of people to protest “seeing our way of life, our aspirations, and our security slip away—not because we have been lazy or undisciplined, or lacked intelligence and motivation, but because the wealthiest among us have rigged the system to enhance their own power and wealth at the expense of everyone else.” Three years later, the “other 99%” are finally rousing from their passivity.

Occupy is the first visible protest of the phenomenal incompetence, fiduciary and ethical breaches, and criminal conduct that was rewarded with bailouts, bonuses, and subsidies all financed by future taxes for debt repayments by the other 99%. That 99% is the “collateral damage” of the avarice of the 1%; the former have experienced financial stagnation, decline, even destruction, and believe they have been deceived, cheated, and stolen from by the financial services sector and government.

Fundamentally, Occupy is about people doing unfamiliar things in familiar places. After all, “In America, we march, we chant, we protest, we picket, we sit in. But the notion of a people’s assembly is a bit foreign. Put simply, it’s a leaderless group of people who get together to discuss pressing issues and make decisions by pure consensus . . . there’s no hierarchy. Everyone stands on equal footing.” Some suggest Occupy is “political disobedience.”

Rebecca Solnit writes, “Occupy. The very word is a manifesto, a position statement, and a position as well. For so many people, their occupation is their identity, and when a job is lost, they become not just unemployed, but no one. The Occupy movement offers them a new occupation, work that won’t pay the bills, but a job worth doing. ‘Lost my job, found an occupation,’ said one sign in the crowd of witty signs.”

Seeking to reverse the inexorable accelerating trend of increasing financial inequality, Occupy promotes dialogue concerning the central question: “Will we build a society to benefit everyone? Or just the 1%?” Recent research reveals that income inequality is the more significant cause of social problems, public health shortfalls, and mental health problems. Sadly, the connection between record income inequality, healthcare spending, health problems, and prison incarceration is too little recognized.

Occupy differs from other protest movements in that it is collectively governed by a general assembly that seeks consensus on positions and decisions. Partly this process derives from lack of organizers' controlling microphones, for in Occupy a speaker wanting to talk calls out “mic check,” then says a few words, which repeat to those behind, and so on, until all have heard that short statement. Then the speaker makes another short statement, and the process of repeating his words for others follows.

Informative and illuminating as are the eclectic perspectives collected in This Changes Everything, an integrative thesis is missing. Further, the presentation suffers from a lack of incisive analysis, such as that which has appeared on the Comment page of Financial Times. Sadly, the 99% are too little aware that the very theory, orthodoxy, and vocabulary of the capitalist model that is the target of their “occupation” might be artfully employed in aid of their cause.

Free market theory and the institutional infrastructures that have been established to implement that theory, are premised upon system efficiency and superior societal economic performance, both of which premises have been recently discredited, if not contraindicated.

Because behavior rather than reason rules decisions and, therefore, markets, markets are not efficient but inefficient. Contemporary governance systems are dysfunctional, if not overtly subversive and incapable of responding to challenges and meeting change imperatives.

Occupy advocates focus on how the pie is divided, rather than the equally if not more important issue of how big the pie might be—or whether some different type of dish might better be served. This volume, the Occupy advocates it chronicles, as well as the policy leaders in Washington are much too concerned with what is happening downriver—the effects and consequences of incomes tilting sharply from the 99% to the 1%—and insufficiently attentive to the causes of those outcomes and the origins of those causes. Such comprehension requires looking upriver to sources, discerning the patterns, and connecting the dots.

Comprehending why the 1% is capturing an increasing share of society’s economic productivity and wealth is a precondition to grappling with the social justice and equitable allocation concerns of Occupy. Until the fundamental shifts in society’s relationships to its places—of production, experiences, and living—are recognized, along with their causes and consequence, Occupy, the Tea Party, and related social justice movements are destined for unending frustration.

This Changes Everything appropriately is evaluated in the context in which it was prepared and in relationship to what else on the subject has been available. That said, as in the land of the blind in which the one-eyed woman is queen, this volume makes a useful, timely, relevant contribution.