The Change: A Novel 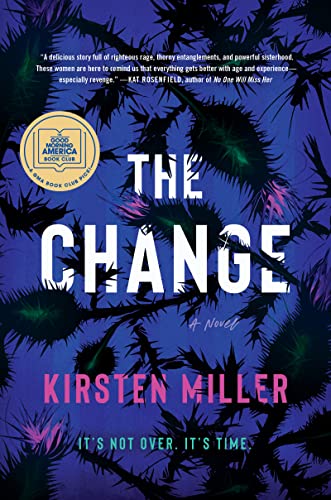 When three females from the tiny island of Mattauk, New York, band together to defeat evil, no one is safe from their powers, giving credence to the saying, "Never underestimate the power of women!"

Middle-aged Nessa James is a former nurse who is a widow of a police officer and mother to twin daughters. When she was young, her grandmother told her she inherited a unique gift that wouldn't come to fruition until she became older. Now alone, while her twins are away at college, she hears the voices of dead girls calling to her, pleading for justice.

Jo Levinson tirelessly struggled to make her way to the top in the hotel industry, only to be shot down by some nasty corporate leaders believing women do not belong in business, even though she turned her company around to make it lucrative. Now, residing in Mattauk with her husband and daughter, she operates a females-only gym. As she begins menopause, she discovers she can channel her hot flashes into power to work for good.

Finally, Harriett Osborne, about to turn 50, sees her marriage and rewarding career collapse. The once meticulous and lushly landscaped residence she shared with her spouse has become overgrown and unkempt, and Harriett rarely leaves her house. Able to concoct potions to cure ills, Harriett can also cause serious harm or death to those she feels need it, demonstrating she is experiencing a different life change and is one with nature.

When the new friends get together, Harriett states:

"'I'm the punishment that fits the crime.' She returns to her work. 'Jo is the rage that burns everything down. Nessa will have to talk to the dead girl's mother. But we'll all have our parts to play.'"

The three meet and walk along a deserted beach after Nessa hears a young girl calling out to her. They discover a body stuffed into a plastic garbage bag in the brush. When they inform the police of the finding, it is written off as a typical druggie overdose. But who crammed this poor girl's body into the trash and left it abandoned?

Sinister activities are happening around this community, and other dead girls call out to Nessa for help. As the trio delves into these events, they find themselves in danger and receive threats over their interest in the missing teens. One night a thug breaks into Jo's home and holds her 11-year-old daughter Lucy captive, making Jo's powers come to the forefront. Beating the intruder to a pulp, she rescues Lucy, though her fears for the child grow.

Something strange is happening in the tony section of Cutler Point on the island. This gated community where the well-to-do reside part-time appears to be the center of all the unsavory scenarios that are taking place. A few wealthy men seem to have a penchant for using young teenage girls before doing away with them, and Nessa, Harriett, and Jo make it their mission to save these victims from their clutches with the intent to destroy these sadistic creeps. After powerful men had beaten them down, they plan to gain retribution by beating them at their own game.

The Change is a lengthy read, though captivating at every turn. The title is right on, seeing the three protagonists entering their "change," where they receive their unique "gifts." The list of differing characters keeps the story flowing with hair-raising speed. Evil presides everywhere, and no one is safe in this tiny burg. Still, three determined women stop at nothing to clean up the area of these perverse citizens, who are preying on young girls for their excitement. No one is above suspicion, and though one may think they know the nasty culprits involved, new insights shock the reader. This story contains profanity, vulgarity, and depravity. Not for the faint of heart, yet, it all blends very well to make an electrifying novel while demonstrating the empowerment of three different women.