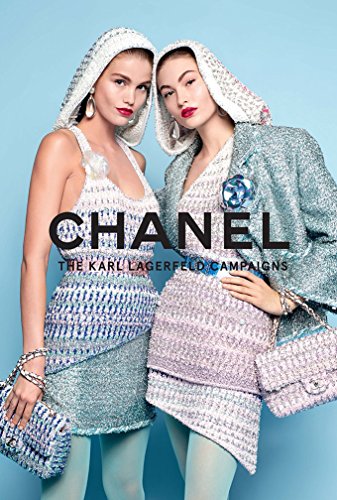 What comes to mind before one even opens this extensive and inspiring volume is that anyone who knows anything about fashion and especially about Karl Lagerfeld and Chanel knows a few things. No matter what he touches he becomes proficient in the extreme, whether it is clothes or words or a million other bits and pieces that make Lagerfeld who and what he is. He is the quintessential multitasker.

The only text contained in this monograph contains is the introduction in which Patrick Mauriès proffers both explanation as well as clarification about the origins and genesis of this book. The three pages open a door to reveal insights about Lagerfeld and his preoccupation with being in control of “his vision” for the brand as well as confirming that Lagerfeld is a perfectionist.

“For a perfectionist like Lagerfeld, God for the devil is in the details and he soon began to express his dissatisfaction with the shots of his creations that he was shown that were being used in press kits.” One might say that after his first four years as a designer he decided to take matters into his own hands and exercise total control of the brand we know as Chanel. It was an early awakening on his part that “everything” had to be to his liking! The recreation of this once sleepy brand was about to be under his total control down to the smallest detail.

“Lagerfeld the photographer can never let himself be outdone by Lagerfeld the designer; and this is equally true when creating images or the other two labels with which he is closely linked: Fendi and KL.”

The astute reader will see the evolution of his vision in his photographic work whether in settings/locations, focus or even props; Lagerfeld is a chameleon of sorts who prides himself with keeping on top of all the latest innovations that surround the world of fashion including the transition from film to digital photography. Again, the text is invaluable and enlightening; otherwise this is merely a book of beautiful images that offer the highlights from the last three decades of Chanel collections.

Chanel: The Karl Lagerfeld Campaigns is most assuredly aimed at those who love and adore Chanel as well those who understand that Lagerfeld unquestionably took on the job of brand building way before there were minions of worker bees to carry out the task or even understood the concept. The book most definitely speaks to the designer, the brand, and the product as well as to the devoted fashionphile.