The Chancellor: The Remarkable Odyssey of Angela Merkel 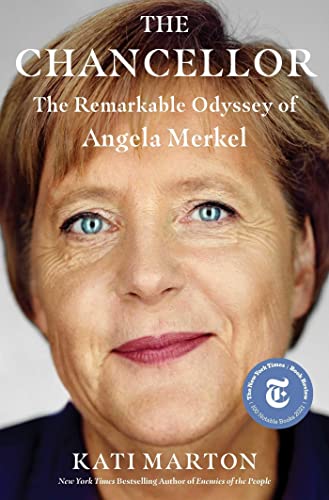 “Marton’s prologue and epilogue sum up Merkel’s astounding political life, and yet all the chapters in between are what provide the immaculate details of how she came to be Angela Merkel.”

Readers of author Kati Marton’s biography, The Chancellor: The Remarkable Odyssey of Angela Merkel will find this not only informative, but fascinating. This book discusses Merkel’s political positions in not only Germany, but European and world politics since the fall of the Berlin Wall.

Marton tells her readers up front that they should not expect to find a lot of personal information, because Merkel and her husband, Joachim Sauer, keep their private lives private. While many biographies often overflow with dry historical family and personal data, this one does not.

What very little we learn about her childhood as the daughter of a Lutheran Pastor can be summed up in her own words: “‘Of course this childhood shaped my life,’ she says, perhaps inadvertently providing the key to who she is, how she has maintained power for an astonishing decade and a half, and why she remains a figure of mystery even in her own country and certainly to the world.”

And so Marton’s research focuses on Merkel’s politics as Merkel rises from growing up behind the Berlin Wall through to 1989, to moving away from a scientific life into one of politics. This is exactly what keeps the pages turning.

Throughout the book, Marton presents Merkel as “the most powerful woman in the world” on several occasions, and the fact that Merkel is a successful woman in a largely unsuccessful male world is often overwhelming.

Merkel is a woman of control; she seldom breaks down and has developed her emotions to a point of control that many in power can not or do not choose to emulate. “However useful for her own political longevity, the extraordinary self-discipline that leads journalists to read into her every eye-roll and nervous tic is also something of a shame, because to understand the present era, we need to understand Angela Merkel.”

As Marton takes us on the journey through Merkel’s numerous political successes from 1990 until she reached the pinnacle of power in 2005 as Chancellor, Marton explains, “the enigma of Angela Merkel only deepens upon closer examination. . . . She is not exactly who we think she is.”

Marton describes The Chancellor as “a human account rather than a political portrait . . .” and yet the reader will learn a great deal about Merkel’s political experiences as the journey continues.

Merkel’s life in West Berlin was fraught with peril as communism held a tight grip on the citizens, and one reads with joy the sense of freedom that the residents experienced in 1989 when the wall fell. The chapter “1989” covers Merkel’s experience in graphic and emotional detail. And this is where her political life began. “by late 1989, her job as a theoretical researcher at the academy struck her as increasingly meaningless. . . . She began thinking about her new life and a new occupation.” And the rest is history. “A pattern soon emerged in Merkel’s political ascent. . . . powerful men . . . would fall by the wayside while she plowed ahead.”

There are moments in the book where Marton moves backward in time to make an impression on how Merkel’s life was unfolding, and each time is an additional peek into how she moved forward through various elections. “As a campaigner, she did not patronize or pretend to have all the answers, but mostly listened, sympathized, and expressed herself in her characteristic plain style, convincing locals that she was one of them.” This ploy worked well for her throughout her political career.

Each chapter focuses on a specific situation or event in her life, and each is fascinating in its own right. In the chapter on “Dictators” Marton talks about dictators both internal and external to Germany and Merkel often handles them better than they handle themselves.

The short chapter on “The Private Chancellor” shines a little light into Merkel’s personal life, and while it is little light indeed, it is satisfying. We learn to respect her need for privacy.

Several chapters talk about the hard events that Merkel has had to wander through, and take Germany with her, in particular the immigrant situation and the uprising of the AfD within her own country. And yet in spite of some stumbling blocks, Merkel’s popularity remains high.

Her relationships with American presidents flip from excellent with George H. W. Bush, to good with Barack Obama, to not-so-good with Donald Trump, after which her love for America stepped back several steps. That respect is now in a position of having to be rebuilt, but she sees the election of President Biden as a positive step.

Her retirement is imminent with the end of 2021 and it’s hard to tell what Germany’s position in the EU, and the world in general, will result in. Merkel is looking forward to being away from politics, and yet one can only wonder how much advice she might share with her followers.

It is safe to say that Marton’s prologue and epilogue sum up Merkel’s astounding political life, and yet all the chapters in between are what provide the immaculate details of how she came to be Angela Merkel.

The Chancellor is a definite must-read!