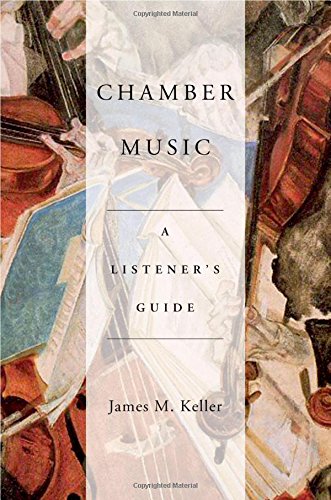 Listener’s guide. The term conjures images of page after page of mind-numbingly dry note-by-note descriptions of measure after measure of music either that no one has ever heard before or that everyone has heard and could sing back upon request. Sounds like a fun read, right?

Happily, with James Keller’s new catalogue of chamber music, we the readers (and listeners) get the stories behind the music, instead of a boring analysis of said music. And not just really popular music. The author created a balanced mix between the extremely well known (J. S. Bach or Aaron Copland) and the more obscure composers (Mikhail Glinka and Jacques Ibert).

Mr. Keller also picked a solid representation of musicians from a wide range of genres, time periods, and countries. While significantly more rare than their male counterparts, even the lady composers of chamber music have a strong showing here, with discussions on Ruth Crawford Seeger, Fanny Mendelssohn Hensel, Clara Wieck Schumann, and Joan Tower. Featuring 192 works by 56 individual composers, Chamber Music: A Listener’s Guide offers something to tempt even the most discriminating and academic individual.

Mr. Keller’s book is a compilation of essays that he has written over the course of his career. In the introduction to the work, the author explains that many of them began life as program notes. Like a lot of catalogue or reference works, sometimes these can tend to be overly technical. The essays in this book, however, read more like short stories.

The stories are meant to give the reader a frame of reference in which to hear the work. By knowing what the composer’s life was like at the time of the composition, we can better understand why the work sounds like it does. Knowing why the piece was created in the first place or who the composer’s patrons were at the time the piece was composed/commissioned can explain why it has a certain flavor or instrumentation. Was it created specifically for a competition or did it win after the fact? Keller’s book covers all this and more.

For example, all of us (or most of us, anyway) have heard of Samuel Barber’s popular “Adagio for Strings.” But it has been somewhat forgotten that the work actually began life as the second movement for the composer’s “String Quartet, Op. 11,” which Barber himself described as a “knock-out.” Stories like this abound throughout the guide.

This book probably does not work well as a straight read-through, unless the reader is a true chamber music aficionado. Fortunately it is arranged in alphabetical order by composer for easy reference.

Thank you, James Keller, for the great stories about many interesting pieces of music. Now if this book just came in paperback, so this reviewer could take it with her to the concert hall . . .