The Chalk Man: A Novel 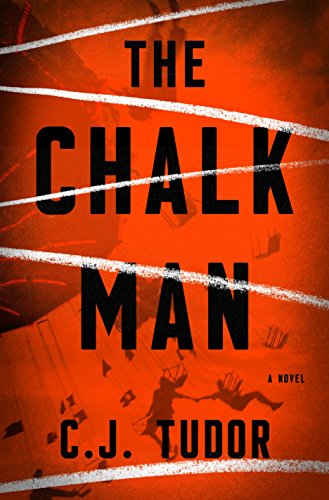 In the summer of 1986, the lives of twelve-year-old Eddie Adams and his friends were changed forever when they found a girl’s body in the woods. Thirty years later, there was another death, and now the grownup Eddie asks himself: Are the two related?

Ed thinks back to that year and remembers things that, as a child, he’d either ignored or didn’t understood. He remembers the horrid nightmares terrifying as well as making him conscience-stricken as only a child facing unexpected death can be.

He is thrust into the past by the appearance of a letter bearing a single sheet of paper with a stick man drawn on it in chalk. It’s a secret message he and his friends used to communicate, and each received one the day they found the body.

Today, each of his friends also received a chalk man in the mail.

“Whoever sent the letters, they cracked open the box, the one I keep tightly sealed at the back of my mind. Once open, Ed’s box, like Pandora’s is a bit of a bugger to close again. What lies at the bottom is not hope, but guilt.”

This coincides with the arrival of one of Ed’s friends, saying he’s writing a book about the murder, and he knows who did it. Because of that, they are all drawn back into the terrible events of that day and what came after.

The turmoil of that time returned, bringing memories of the murdered girl, a love affair between a student and her teacher, a suicide, a minister who breaks the laws of God and man, and revealing confessions among the friends themselves.

“We want answers but what we really want are the right answers. We ask questions that we hope will give us the truth we want to hear. The problem is, you can’t choose your truths.”

This could be called a coming of age story as well as a mystery. Narrated in two parts, from the adult Ed’s point-of-view as well as that of the twelve-year-old Eddie, it gives two perspectives of the same events by the same person, colored with the acquired wisdom of the intervening years.

Young Eddie sees and hears things a child understands only on the surface. Even when he dares ask, adults don’t give the right answers. Adult Ed understands them better and wishes he could’ve done so at the time, but would it have made a difference?

Ed has his own secrets. As a child, he “collected” things, stealing really, though he rationalized otherwise, “If you want to hold on to something, you had to hold on to every part of it. To remember its time and place,” and his horde of objects adds a bizarre side note to what happens, because it reveals that young Eddie wasn’t as innocent of everything as he seemed. Both real and imagined crimes are eventually punished. Adults do things for one reason, children for another. But Ed’s escaped any kind of punishment—or has he?

This novel has been compared to Stand by Me and undoubtedly there will always be such comparisons. The Chalk Man, however, has a much deeper level because young Eddie learns that everyone has secrets, though some are terrible and some are little more than mistakes. Also, people act without thinking, and doing the right thing in the wrong way can bring about unforeseen tragedy.

The Chalk Man is a well-written novel of deep resentments, long-stifled conscience, and justice a long time coming, for both the murderer and the narrator. Its only marring factor: Once again, an author has chosen to tell part of the story in that first-person present tense.  The fact that this is done only for present-day narration while the flashbacks are told in past tense is all that makes it bearable enough not to detract from the story.

As a debut novel, this one is a winner. There’s no doubt readers will be looking forward to more from C. J. Tudor.