A Certain Age: A Novel 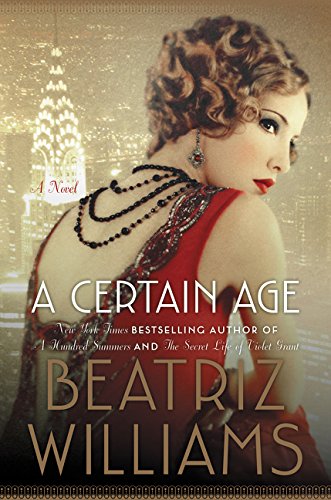 “Maybe all this freedom doesn’t make you any happier, after all.”

It’s 1922 and no one feels more free than Mrs. Theresa Marshall. Blessed with generations of money and influence and in lucky possession of a “bedroom agreement” with her older husband, Theresa is enjoying the romantic attention of a man literally half her age.

When her dissipated brother decides to ask a much younger woman, Sophie, to marry him, there’s no question whether he will employ the ancient family tradition of having a cavalier deliver the proposal. Who better to act as family knight (and to investigate the family of the girl in question) than Theresa’s paramour, Octavian? Well . . . just about anyone.

Beatriz Williams’ newest novel, A Certain Age, is a delicious romp through high society of the Roaring Twenties. Loosely based upon the comic opera Der Rosenkavalier, Williams’ story is full of light, bright moments and dialogue worthy of a 1940s Howard Hawkes film: “Oh, but this time it’s real, Peter. I haven’t stopped thinking about him.”

“Applesauce. Haven’t you heard of love at first sight?”

Williams has found her niche in the 1920s and is just as comfortable with her narrative as with her dialogue. Full of period vocabulary and references, A Certain Age is a delight to read. Each character has a true individual voice and presence, which has become rare in an era where a collection of quirks is often the medium authors use to distinguish characters. Though Theresa’s chapters are in first person and those in the point of view of other characters are in third person, that device does not to make it easier to know who is speaking; it would have been clear regardless.

A Certain Age employs time jumps to magnificent effect as well. Though many chapters follow events in a scene sequentially through the eyes of different characters, Williams does not hesitate to take the reader back in time to view the beginning of Theresa and Octavian’s affair, indeed to the early years of Theresa’s marriage.

Theresa begins as a rather distasteful character, comfortable with adultery and completely relaxed with the idea of using her young suitor to make herself feel young and to spy upon Sophie’s family, but past events revealed throughout the course of the story slowly peel back her brittle façade and reveal a woman of unplumbed depths.

And that is the real genius of this story. Deriving as it does from a comic opera, the bare bones of the story are simple: a woman of “a certain age” with a younger lover schemes to keep him from his new young love. Aided by the machinations of servants, that was enough to keep an opera afloat.

Williams’ stroke of brilliance was in setting her novel in an era of massive social change in America. It is indeed “a certain age”: young men just back from World War II were devastated by the carnage they witnessed, finances were getting tight at home (still in the build up to the Great Crash of 1929), and women were able to consider options other than marriage for their futures.

This social background adds depth to the story, as does a slight murder mystery. Sophie Fortescue, Theresa’s brother’s intended, opens the story to more modern eyes. Though her father has become wealthy through hard work, she is as much a stranger to the upper class world of her fiancé, Jay (a nod to Jay Gatsby?), as the reader is likely to be. Casual adultery, heavy drinking, lavish spending—these are things unfamiliar to Sophie; Williams seems to recognize that modern readers might find the lifestyle of Theresa’s set unrealistic, and she uses Sophie to emphasize that, while these things did happen, they didn’t travel down far into normal life.

Octavian, too, could read as too old for his age. Williams deals with that by letting Octavian tell his story of being an 18-year-old pilot in a war where six flights were as much as most pilots had in store for them before they died. Theresa’s son (one of two is introduced, late in the book) is older than his years, too. Theresa watches him preparing a martini, reflecting, “He’s very good at it . . . Probably had lots of practice, and yet he’s only nineteen. . . Wasn’t Prohibition supposed to put a stop to all this expert drinking? Now look at us, a couple of years later. We’re a nation of incipient alcoholics, even the youth. Especially the youth.”

A Certain Age is a brilliant novel of love, loss, and difficult choices, wrapped in a narrative that is often wryly funny and always witty. Beatriz Williams treads the same waters as F. Scott Fitzgerald and proves herself more than worthy. She outpaces her simple muse of Der Rosenkavalier in an astronomical way; Strauss is well-served by her homage. In the process of retelling his amusing story, Williams broadens her narrative to include a statement on the “freedom” of the Jazz Age, whether sexual or personal, it isn’t always positive. This is a book to luxuriate in, immersing oneself in a singular age in America. Simply a triumph.