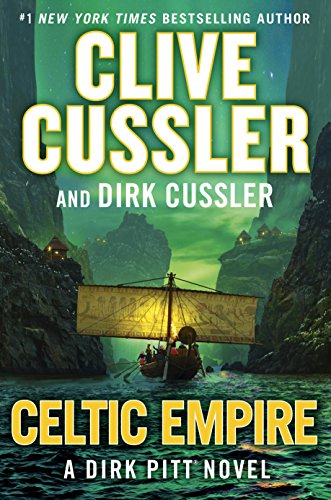 “Celtic Empire hits all the right notes for lovers of classic adventure. As with most of their novels, the Cusslers inject strong elements of Indiana Jones-style archaeological adventure.”

Celtic Empire hits all the right notes for lovers of classic adventure.

The Dirk Pitt adventures by Clive and Dirk Cussler follow the exploits of its namesake character Pitt, a veteran, pilot, scuba diver, treasure hunter, and director of NUMA, the National Underwater and Marine Agency. Pitt’s team, including partner Al Giordino and his children Summer and Dirk, Jr., travel the world, protecting its waters and invariably becoming caught up in conspiracies and adventures with consequences on a global scale.

In typical Cussler fashion, the present-day conflict is fueled by an event from ancient history. In Celtic Empire, the prologue takes the reader to 1334 Egypt, where a ship carrying princess Maritaten flees a deadly plague.

“Meritaten sat with Gaythelos as the Egyptian shore drifted away behind them. She clutched the goatskin bag tight to her chest, contemplating her future. While she had saved untold lives, she had also sacrificed everything she held dear.”

The story moves ahead to present day, where a series of catastrophic events set the story in motion. In El Salvador, a team of United Nations scientists are killed while testing water quality as part of an investigation of an outbreak of a deadly, cholera-like illness. In Egypt, Summer and Dirk, Jr. are working on a dig when it comes under attack from tomb robbers. And in the United States, a NUMA diver is murdered while investigating a sunken tanker in the Detroit River.

Dirk Pitt eventually puts the pieces together and the trail leads to Evanna McKee, CEO of BioRem Global, a company that has developed microorganisms used for pollution control. (A substance similar to the oil-devouring bacteria in Cussler’s recent novel, Sea of Greed.) The story eventually circles back to Princess Maritaten and the NUMA team sets off on the trail of her final voyage.

Celtic Empire hits all the right notes for lovers of classic adventure. As with most of their novels, the Cusslers inject strong elements of Indiana Jones-style archaeological adventure.

“Dirk could see from Summer’s and Zeibig’s lights that they were indeed standing in a burial chamber. The room was small, giving the impression of hasty construction. Three of the walls were bare. On the fourth, a painted mural showed numerous figures with a river in the background. In front of the mural stood a raised platform with a small wooden coffin. Barely four feet long, its top was carved with the features of its occupant. Unlike the famous tomb of Tutankhamun, the coffin was not gilded, but hand-painted. At the foot of the casket stood an array of clay jars and figures, a model boat, a heavy wooden staff, and a solid gold toy chariot.”

The authors keep the story moving along at a steady pace with interesting settings and thrilling action scenes. From the jungles of Central America to the croc-infested waters of the Nile and across the sea to the home of the ancient Celts, Dirk Pitt and company embark on a thrilling adventure that’s difficult to put down.