The Causes of War and the Spread of Peace: But Will War Rebound? 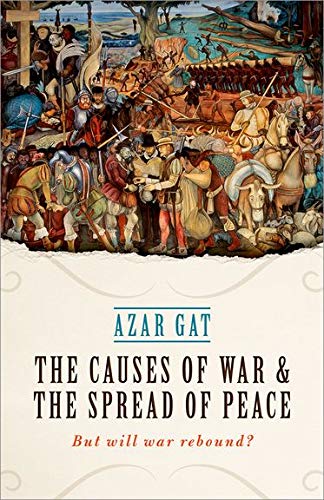 “a fascinating book that offers a comprehensive look at why humans wage war and violence on each other.”

Why do humans got to war? Is it ingrained in our DNA or is it a construct of civilization? What distinguishes war from other types of human violence?

These are questions that Azar Gat delves into in this new book that wastes no time diving into weighty discussions on the conflicting views of war and humanity’s propensity for killing by Hobbes and Rousseau. Building on his earlier work War in Human Civilization, this volume takes a unique look at war as a human phenomenon, beginning from prehistoric hunter-gatherer tribes to modern nation-states.

In this dense tome, Gat combines anthropology, international relations, political science, sociology, and military history to provide not only an insightful survey of the current state of academic thought, but his own conclusions and observations on this clearly controversial topic.

The book is divided into two distinct, but related sections. One examines the definition, origins, and causes of war among humans, as opposed to other types of violence, and the second section examines if, and why, humanity has shown an overall decrease in the utility and destruction of war.

Within each section Gat makes a thorough survey of the current state of academic research and examines how various theories have evolved over time. As he makes this survey, he also does an excellent job of synthesizing and analyzing all of the works to try and develop a more coherent and complete view of warfare as a human endeavor.

No surprise, he concludes that warfare has been around since prehistoric times, although it is hard to distinguish whether our ancestors died in conflict within a tribe or group or conflict between opposing tribes based solely on archeology. In either event, killing occurred fairly often, and one is left with the inescapable conclusion that life for our hunter-gathererer ancestors was often short and violent, with a high percentage of each tribal or family group killed or wounded in any given year.

Using archeology and anthropology in addition to historical research, he makes a very good case that as agriculture and animal husbandry slowly ended nomadic existence for many people and spawned the first Western civilizations in Egypt and Mesopotamia, warfare still remained quite frequent and violent, although the imposition of order and structure within the group decreased some killing overall.

The second part of the book is more interesting as Gat examines the current trajectory of war and whether open conflict between states or societies is truly on the decline overall. Again drawing on a large body of recent work, he synthesizes an interesting conclusion that peace has been the trend overall for the last 200 years, even with the cataclysms of two “world wars” and that several socio-economic and psychological factors, which he describes in great detail to support his conclusion, seem to be decreasing the utility of war as a means of conducting international affairs.

For anyone interested in the root causes of war at as opposed to how war is waged, this is a fascinating book that offers a comprehensive look at why humans wage war and violence on each other. Understanding why humans fight and kill each other is often not considered as much in military history as it should be and books like this help close that gap.