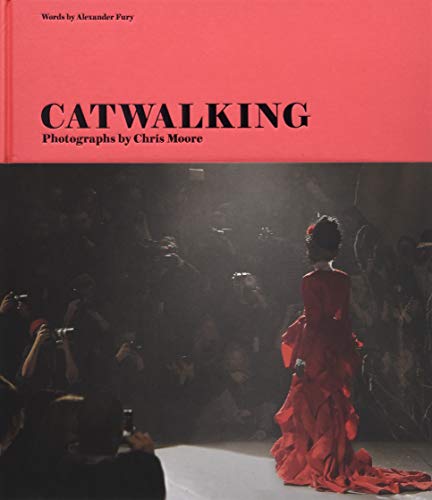 “Catwalking is a very personal and intimate chronicle . . .”

Chris Moore is unquestionably a living legend of fashion, and yet not many fashion folk could pick him out of a crowd or even recognize his name. He has attended, witnessed, and photographed collections for over half of a century. He remains humble, and most enviable of all is that he is still engaged with his métier.

Moore’s Catwalking is of monumental size and weight, a perfect match for the near half-century archive of a man who has been labeled the first ever catwalk photographer. One might even go so far as to say he is the first of this photographic category to base a life’s work on it.

Despite Moore’s admission that he is better with a camera than with words, Alexander Fury has been able to take Moore’s images and thoughts and translate his visual fashion savvy into informative and intelligent text. As noted in the book Moore says, “I am a camera,” which is surely an apt description of this artist. Catwalking is a very personal and intimate chronicle, a diary, and a progressive body of work that Moore has created with his boundless supply of fashion photographs.

“Moore’s images are not mere records; they were active participants in these fashion moments. His presence, as a photographer, caused a model to stop, pause and pose. The moment he captured is his, and his alone.”

What is interesting here is that Moore’s oeuvre is the polar opposite of Robert Fairer’s (Alexander McQueen: Unseen and John Galliano: Unseen), since they have viewed the fashion show/runway with divergent mindsets. Moore’s images are focused on what is out in front, while Fairer’s are seen from backstage or as his titles suggest . . . unseen. The titles reside within the same genre, and yet each author has chosen a unique perspective.

This epic volume offers a history of catwalk photography and why it is now an integral part of fashion. Many of Moore’s images have rarely been seen. The book is not solely a visual catalog in so much as it is also a narrative coauthored by a fashion historian of sorts and a fashion journalist who give us a varied story rather than just the runway images.

Even though the photos are presented somewhat chronologically, they are not offered by show/designer as we have become so accustomed; instead the images are selected in what might appear to be random order. Also keep in mind that this is split-second photography. This is not posed orchestrated or arranged. These are the moments of fashion that Moore has recorded and made his stock in trade.