Cats in Art: A Pop-Up Book 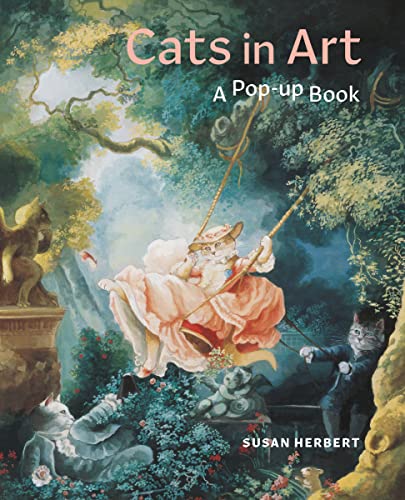 “Susan Herbert's imaginative scenes by classic artists from the 15th to the 19th centuries, accompanied by Corine Fletcher's charming feline pop-ups, will delight cat fans and culture buffs for decades.”

"In the autumn sunshine, in a Bruges townhouse, a couple stands united, paw in paw, ready to plight their troth."

So begins the story of how cats came to be in the Jan Van Eyck painting, titled: The Arnolfini Portrait, 1434.

Susan Herbert and Corina Fletcher have written a delightful pop-up book of re-interpretations of Herbert's favorite 12 classic famous paintings. Each page is a three-dimensional work of art, depicting cats dressed in the costume of the times and having conversations. "'I do,' says Mr. Arnolfini, proud and upstanding in his large and magnificent hat. 'Me too,' says Mrs. Arnolfini . . . pondering the mysteries of geometric orthogonal perspective."

The next page shows three cats interpreting Sandro Botticelli's The Birth of Venus, c. 1484–6. "‘'Hey,' says Venus, crossly, 'I'm the Goddess of Love, so knock it off.'" The expressions on their faces actually resemble those of humans.

In the one of Diego Velasquez, Las Meninas, 1656, our feline characters seem to be moving in and out of the page. Dressed in colorful costumes, they are holding hands and one cat has his hind paw on the back of a rodent.

"'Higher!' shrieks Miss Kitty, eyes shining, whiskers quivering . . . She kicks off a shoe and sends it flying. That will give those enlightenment philosophers something to think about." Her brother is tired of pushing her. And this ends the story of Jean-Honore Fragonard's The Swing, c. 1967.

A most creative pop-up in this book is the one of Ophelia by John Everett Millais, c. 1851–2. Those colorful feline characters play the story of Ophelia by Shakespeare. "Ophelia has not had the best of days. First her father disapproves of her boyfriend . . . and then he's gone off to murder said father." Ophelia cat is shown upside down floating in the water.

Last but not least is the bartender cat, dressed in full garb of the 19th century, black button-down suit with bowtie with several bottles in front of her. "'Absinthe, absinthe, absinthe' grumbles Suzy the barmaid . . . An elegant bewhiskered gentleman approaches and raps the bar with his paw . . ." Edouard Manet would be happy to keep this serious barmaid in his employ. A bar at the Folies-Bergere, 1882.

Susan Herbert's imaginative scenes by classic artists from the 15th to the 19th centuries, accompanied by Corine Fletcher's charming feline pop-ups will delight cat fans and culture buffs for decades.