A Casualty of War: A Bess Crawford Mystery 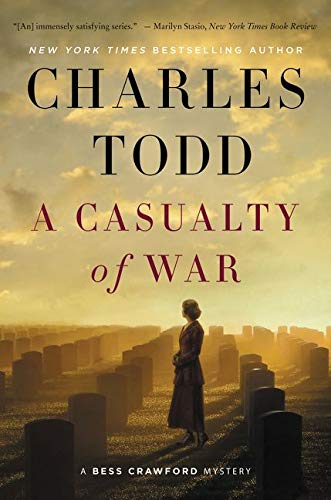 In early autumn of 1918, a battlefield nurse on her way to a forward aid station meets an enlistee from Barbados. “‘I’m not a patient,’ he told me. ‘I’m trying to rejoin my regiment.’”

Bess Crawford will see Captain Alan Travis again when he’s carried into her aid station with a head wound. Raving and delirious, he insists he was shot, not by a German, but by a British soldier, James Travis, a distant relative he met on the train to Paris.

Bess promises to have someone search for his assailant, but her inquiries meet with failure. When she next sees Travis, he’s been wounded a second time, shot in the back—again by his cousin, he claims. This wound gets Travis sent to England while Bess continues searching for his cousin. What she discovers isn’t good; James Travis was killed in action a year before. He couldn’t have shot Alan either time.

Then the war’s over.

“We became aware of the silence. We lifted our heads, listening. In the distance I saw men falling to their knees. I walked outside. There was no mad cheering, just blessed silence.”

Bess returns to England where she and her friend, Sergeant Major Simon Brandon, drive to Suffolk to see her family—and she once again crosses paths with the insistent Captain Travis.

Alan is now in a rehabilitation hospital, diagnosed with shell shock, partly because of his head wound, compounded by his insistence about James.

When Bess explains that James is dead, Alan’s adamant it can’t be so. To clear Alan of the shame of his diagnosis, Bess decides to disprove his accusations once and for all.

“‘Tell me where to find the English branch of your family.’ I asked again. ‘And I will discover what I can about James Travis. If he’s dead, I’ll try to find the man who shot you.’ ‘Thank you,’ he whispered gruffly.”

A memorial plaque in the local church points to James’ death, as does his will.

On the strength of their one meeting, James Travis left his estate to Alan, but his mother refuses to accept Alan as her son’s heir. Her lawyer is dragging his feet in locating Alan. When they discover he’s hospitalized not far away, both are eager to prove he isn’t competent to accept his inheritance.

“‘I think Mrs. Travis is afraid that with the war ended, the man who is next of kin will come to her door and ask to step into her son’s shoes . . . She strikes me as far too intelligent a woman to deny that her son is dead.  Yet it’s the only explanation I can think of for her to refuse to agree to James’ heir.’”

By now, all Alan wants is to forget everything and return to Barbados, but someone wants him out of the way for good.

When a man believed to be a private inquiry agent is murdered, the lawyer’s offices are broken into, and a young girl is assaulted, Allan seems the obvious culprit. With the captain now in hiding and the police refusing to look for other suspects, it’s up to Bess, backed by Simon and her father, the colonel, to ferret out the truth and prevent a gallant soldier from being arrested for a crime he didn’t commit.

What they discover is a very obvious conspiracy, and a definite study in a “practice to deceive.”

While it may be odd to describe a story set during a war and its aftermath as a “cozy” mystery, this novel is definitely that with its adherance to turn of the century manners and etiquette.

There’s a great deal of background about the war, but only as it pertains to Bess and the aid unit she’s with. Without going into elaborate detail, it reveals the plight of the wounded, and the ignominy of being diagnosed with shell shock, which was then viewed as cowardice. It also points out the danger nurses and doctors faced. The preciseness of the day the war will end . . . noted to the minute in a comminqué, points out its futility, that war may be over but men keep dying until that final minute is reached.

The characterizations in this story are well delineated in such a way that while James Travis’ mother may seem a villainess in her refusal to accept Alan, she also remains a sympathetic character in her grief for her lost son. Though the plot isn’t as convoluted as some, it definitely has twists and turns forcing the reader to use a few “little grey cells.”

This entry in the Bess Crawford series should inspire readers to look for other novels by the mother-and-son team writing under the name Charles Todd, for those will undoubtedly be equally entertaining.