Casting into the Light: Tales of a Fishing Life 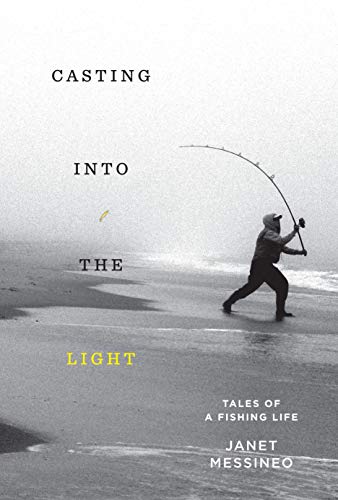 “By following her own path, Messineo offers a sense of direction to those who are unmoored or feel lost at sea.”

Fishing never changes; all that it has ever required is a rod, a line, bait or a lure and a fisherman or fisherwoman with patience. But fishing has also changed dramatically from what it was not that long ago, as Janet Messineo shows in her spectacular new and illuminating book, Casting into the Light.

In the waters of the U.S., and all over the world, whole schools of fish have been depleted. Now many fisherfolk have a newborn appreciation of ocean ecology and the need to protect endangered species.

“I now do my part in conserving the fish I once longed to possess,” Messineo writes at the beginning of her book. “Many times after I’ve landed a stripped bass, I pause to admire its magnificent beauty, then I release it back into the surf and wish it well as it swims off to live another day.”

A native of Massachusetts and the granddaughter of textile mill workers, Messineo wasn’t born an environmentalist, but she grew to become one, which is part of the story that she tells. Subtitled Tales of a Fishing Life, her memoir is more than a collection of tales about fishing, though fishing provides the main line that runs through the book from beginning to end.

Messineo writes about the big fish she has caught, especially Morone saxatilis, aka stripped bass, which can weight as much as 50 pounds.

She also writes about her fishing friends, her own family members, and about Martha’s Vineyard, where she has lived and worked most of her life, and that’s now a major summer destination, but that was once a remote island with a small year-round population.

So Casting into the Light tells the story of a time and place that have changed radically over the past half century. Messineo remembers places that don’t exist anymore and lifestyles that have vanished.

In the Acknowledgements at the back of this book, the author describes “The Wednesday Writer’s Group” to which she belonged and whose members met in the living room of an 18th century home.

“I thank them for reassuring me when I expressed all the self-doubt that comes naturally to a recovering substance abuser,” Messineo writes.

Before she was invited to join the group, most of the writing she did went into the fishing log she kept in which she recorded detailed information about the size and weight of the fish she caught and an occasional entry about her own inner self.

“Something is wrong with my life, but I can’t quite figure out what’s wrong,” Messineo wrote on May 6, 1983. “I’m very unhappy about this.”

Messineo wears her own feelings close to the surface and tracks her own emotional ups and down and her abuse of alcohol and opioids to which she had relatively easy access. Messineo figured out the intricacies of fishing. She also came to terms with her own substance abuse and chemical addictions.

Fishing wasn’t ever an addiction. It was an “obsession” that took over her life. Indeed, she explains that for years she would rather fish than eat or sleep or enjoy the company of other human beings.

Messineo vividly describes that it feels like, and what it looks and sounds like, to stand alone in the darkness at the edge of a body of water hell-bent on catching a fish, no easy feat for a newcomer or a seasoned fisherman.

When Messineo began to fish, women were a distinct minority, though over the years they grew in numbers.

Messineo offers tips about fishing, along with recipes for cooking fish, clams, scallops, and how to make “black sauce” from squid. Having grown up in a working-class Italian family in which the women cooked and served traditional food, the author knows what’s needed to make perfect linguine with clams, olive oil, garlic, and parsley. Her recipe is a classic.

Readers who like to eat and to fish and who have enjoyed summers on Martha’s Vineyard might appreciate Casting into the Light. Messineo’s book is a great introduction to the island, its geography, topography, and history, including some of the history of the Indians who were the first humans to fish for striped bass.

Casting into the Light tracks the spiritual journey of a wild, young girl who became a wise woman. It offers a compelling and candid story of an unrelenting pursuit for meaning and happiness. Messineo didn’t set out to become a role model, but she became one anyway.

Her book ought to help readers of all ages who sense that there’s something wrong with their lives but aren’t sure what it is.

Fishing might help. Writing might also help. By following her own path, Messineo offers a sense of direction to those who are unmoored or feel lost at sea.