Case White: The Invasion of Poland 1939 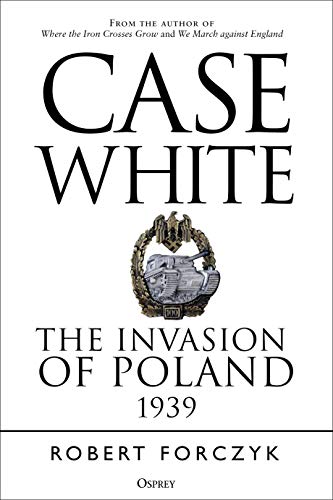 “Germany was not the invincible juggernaut, the Soviets were merely allies of continence because Hitler turned on them, and the shameful actions of appeasing governments in Britain and France all but guaranteed war.”

The German invasion of Poland began World War II, yet the actual campaign, known to the Germans as Case White, has received short shrift by most military historians. As Robert Forczyk notes in this new volume, most accounts of the five-week conquest repeat anecdotes heavily influenced by wartime propaganda and myth. He sets out to correct these misconceptions and succeeds in penning a more balanced and nuanced account of the valiant, but ultimately futile Polish struggle against not one, but two invaders.

Forczyk does an excellent job of setting the stage, covering the period between the creation of Poland after World War I to 1939. He covers both the major military and diplomatic decisions that created the opposing armies and guided their strategy and tactics. His coverage of both the German and Polish militaries is quite balanced and offers some interesting insights into the German military that went to war in 1939.

The German Army was not yet the mechanized juggernaut that would conquer Europe in 1940. The Germans still relied upon horse-drawn artillery and logistics, as it would throughout the war, and  many of the German tanks were under-armored and armed only with machine guns.

In addition, the Germans faced a steep learning curve in integrating infantry, tanks, and artillery in combat, and they suffered a number of sharp reverses when attacking well-fortified Polish positions. Moreover, the Germans experienced significant command and control as well as logistical challenges that would require correction before their 1940 campaign.

Although the Poles fought valiantly, their poor strategic decision to defend their borders with static troops, combined with significant command problems allowed the Germans to outflank most of their forces and gradually push them back toward Warsaw. The Poles were essentially defeated in a series of piecemeal engagements where German firepower and inititiative kept up a pace of battle that the Polish command structure could not overcome.

Forczyk also looks at Poland in the bigger geo-strategic picture, and neither the Western allies nor Soviet Russia comes off well. The Soviets are right behind the Nazis as villains in Forczyk’s reckoning. The Soviets opposed the creation of Poland from the beginning and worked throughout the 1920s and 1930s to undermine Polish sovereignty. The 1939 Soviet non-aggression pact with the Nazis, including the secret protocol to divide Poland between them, was the final step to starting World War II, allowing Hitler to abide, albeit temporarily, a two-front war in Europe.

Once the Soviets rode into eastern Poland and occupied the eastern part of the country, they committed at least as many atrocities as the Germans, including the infamous Katyn Forest massacre of thousands of Polish military officers and others deemed dangerous to the Soviets, a massacre the Russians continued to deny until the opening of Soviet archives in the 1990s.

The British and French governments also come off as cynical and shameful, giving the Poles the mistaken impression that they will militarily support them if Hitler attacked. They offered only a token of support once the invasion occurred, declaring war on Germany with no real intent or strategy to help the Poles.

The actual beginning of World War II has often been quickly bypassed to get to the sweeping campaign of 1940 and the subsequent actions in Russia, the Mediterranean, and Western Europe that culminated in the defeat of Nazi Germany. This book takes the reader back to the beginning, showing that Germany was not the invincible juggernaut, the Soviets were merely allies of continence because Hitler turned on them, and the shameful actions of appeasing governments in Britain and France all but guaranteed war.

The brave Poles deserved better, and for the 80th anniversary of the start of World War II this book finally tells the story of this forgotten but critical campaign.