A Case of Redemption 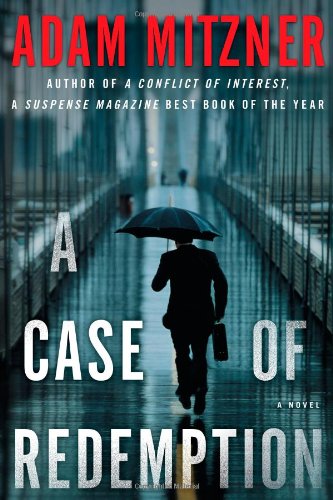 A Case of Redemption is a well-written novel on par with New York Times bestselling author John Grisham’s popular books.

Adam Mitzner brings his own expertise as a lawyer into play as he weaves this gripping tale about a rapper accused of murdering his girlfriend. Courtroom protocol, legal language, and judicial procedures are spot on, giving the reader a front row seat at a high profile murder trial.

The book’s protagonist, Dan Sorenson, is brilliantly portrayed as a highly successful defense attorney. As Sorenson wins one of the biggest cases in his law firm, he quickly becomes a partner. His success is short-lived, however, as his wife and child are both killed in an auto accident the very next day. The tragedy snuffs out his rising star and his ambition, as he sinks into a booze-filled world of sadness and depression.

Guilt laden about the hours spent at the law firm instead of with his family, Sorenson shuts himself off from the outside world. Then, unexpectedly, another high profile case finds its way to his doorstep.

Hoping this new challenge will reignite his passion for the law, Sorenson agrees to defend an up and coming rapper in what appears to be an open and shut case of jealousy fueled murder. Knowing an acquittal will reignite his career, he takes on the hopeless case.

In addition to regaining his legal skills, the widower who once thought he may never love again, finds that may not be the case. His passion for both the law and the human emotion come to a climax at the end of A Case of Redemption.

A Case of Redemption is engaging and compelling—a story that literally challenges the reader to move on to the next chapter rather than setting the book down. With plenty of plot twists and turns as well as a hugely unexpected turn of events at the end, Adam Mitzner’s legal thriller is fresh and satisfying.