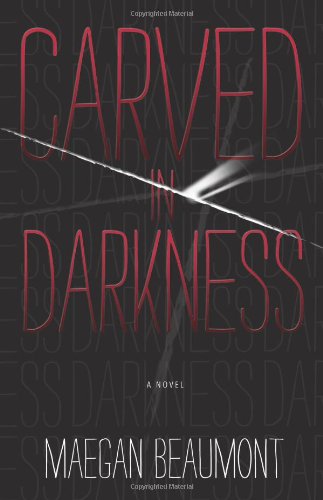 “. . . a compelling psychological thriller with a satisfying conclusion. An excellent debut novel.”

Carved in Darkness is a chilling, suspenseful read.

The story begins in Yuma, AZ, in Dec. 1999. Melissa Walker is bound, gagged, and in captivity. Her captor has stitched her eyes closed. Now he wants to chase her—a grisly yet fantastic hook that grabs the reader by the throat. Even as the details get more graphic and shocking, it’s hard to pull away.

After 83 days of torture, 17-year-old Melissa is left for dead in an isolated churchyard. Her killer does not know she survives. Only two people know. Fifteen years later, she begins her life over in a new state and with a new face and name: Sabrina Vaughan.

As a homicide inspector, Sabrina is tough, more able to take care of herself, yet plagued by her memories and a sensation she can’t shake. She feels she is being watched.

Horrors from her past catch up with her when childhood friend, Michael O’Shea, finds her. He blames Sabrina for the terrible fate that befell his little sister, and plans to make her survival public to suit his own purpose: revenge.

Beleaguered by problems with a fellow homicide inspector, her past closing in on her, Sabrina’s grip on reality is threatened, and her mental stability begins to crumble.

The story is filled with intense scenes, plenty of action, and moves at a rapid pace. The female protagonist is far from perfect, yet she is strong, likeable, and draws emotion from the reader. We pity her, root for her, share in each triumph, and bemoan her failing. The author spares no graphic detail. The rape scenes are vivid and violent, yet necessary.

Carved in Darkness is a gritty thriller, an adrenaline rush from start to finish. Even in the less brutal scenes, the threat of menace hangs over the reader. We know the psychotic killer is out there, and we know that once he learns Melissa Walker survived he’ll come for her again. The mounting tension keeps us reading, holding our breath, waiting.

Although some readers may find the subject matter too dark and certain scenes difficult to read, the story is compelling. Ms. Beaumont’s characters are rich, well developed, flawed, and complex. She brings them to life and places the reader within reach of the serial killer roving through her text.

The transformation of Melissa is shaped by the darkness in her life before and after her abduction; it is also telling, perhaps lending truth to the saying: “What doesn’t kill you makes you stronger.”

In Carved in Darkness, Maegan Beaumont has crafted a compelling psychological thriller with a satisfying conclusion. An excellent debut novel.